Believe In Yourself – Part II by TeraS

A Review of Chronicles of The Covenant: Succubus, Part One by Michael Aurelius 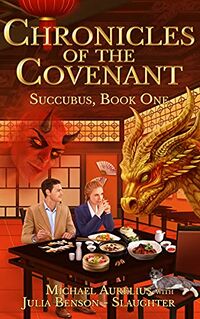 Chronicles of The Covenant: Succubus, Part One by Michael Aurelius

A review of the first work in a series that has complex depth, a main character with a lot of promise, and a story which holds one’s attention.

Becoming a succubus has questions and issues to overcome, and if one is allowed to deal with them, the result of the story can be something unexpected.

The Fall of Civilization could not be traced to one single cause. Instead, it accumulated through centuries of war, famine, hate, and faith lost in fellow beings. As the Fall accelerated, nation-states fought each other, then cities fought cities. Near the end, the fighting came down to household against household. Finally, when the last bullet was fired, the remaining survivors came out of their bunkers, looked at what remained, and vowed not to make the same mistakes as their predecessors made. Succubus begins the story of The Fall following eighteen-year-old Rebecca Mercer through her discovery that she is a succubus. Her destiny has already been written, but she does not believe in the path set before her. She is guided through her growth by a general of the demon armies, Lilith, the first woman and succubus, the Old Gods, and her lover Francis Cubis, a fully mature incubus. The story starts at the beginning of time itself, through today and into tomorrow. Not everyone is whom they say they are, and surprises lurk ahead for Rebecca and Frank as they try to navigate their Paths to the future.

The story of Lilith is never quite all told in full. But when one is chosen by Llith, the path can be strange, odd and even twisted at times. But regardless of all else, being true to oneself, and those that matter, can make revelations be real.

Rebecca Mercer, the succubus of the work is wonderfully interesting as her story unfolds. Along with Lilith’s hand in things and the attentions of all of the other characters in the story make her life, and the story overall, very complex. I thought that was done well and how Rebecca deals with learning the past, coming to terms with herself, and what that means, creating something very unique.

The writing is very well done, there are a few minor points where the story loses focus and wanders away from things to an extent. It’s not a huge issue, but drifting off from a critical point to something of a vignette seems to be out of place a little. Regardless, an interesting story of becoming, discovering, and coming to age.

I enjoyed the complexity of the story, the depth of the characters and there’s a lot of thought given to how things developed. Rebecca is unique and her relationship with Lilith allows a lot of story. Overall, there’s a lot of promise here, if perhaps there might need to be a bit more time spent in the telling and less in the guiding of things. The second work I look forward to and hope it will be as delightful as this was.