Believe In Yourself – Part II by TeraS 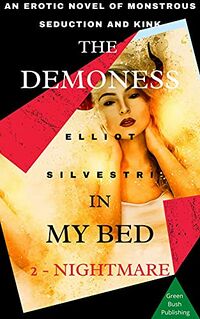 The Demoness In My Bed 2 – Nightmare by Elliot Silvestri

A review today of the second work in the Demoness In My Bed series, you can find the first review here. The thing about stories which involve a succubus is that, one would expect, the succubus would be somewhat core to the story itself.

The question becomes however, what exactly is the story when the succubus isn’t much more than a thought?

After my one night hook up with Meeza, everything in my life rapidly got out of control. It was bad enough that I was having sex with my boss, but was far too tempted by the young hires in the office…and just about every other person I laid eyes on.
All of this wasn’t helped by the nightmares I started having. Nightmares about Meeza…

A story of one man’s sexual needs continues unabated while a succubus watches and gloats.

The story continues to be a series of sex scenes which really don’t go anywhere past the sex itself. The characters remain uninteresting, the story drifts and it doesn’t seem to know where it really wants to go. There’s just nothing much past the erotica, which overall didn’t have a lot of heat for me to be found.

As for Meeza, the succubus of the work, she’s barely present in a handful of pages. Other than taunting the main character, she’s just not really that much of a succubus overall. There’s no development in her character, there’s nothing new added about her. She’s there to watch, more than anything, and then laugh at the exploits of the main character.

Perhaps Meeza will be more present in the next part. I really hope so because she’s really underused so far. That’s a shame really and as the erotica and story otherwise isn’t interesting at this point, shifting focus might be what’s needed to make things better.