Believe In Yourself – Part I

A Review of The Corruption of Sister Verity by Lavandula Bloom 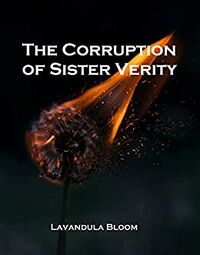 The Corruption of Sister Verity by Lavandula Bloom

One of the rarer story ideas is of a character who is both succubus and incubus. Not in a singular form however, as many futa succubus stories are, but rather two separate forms.

It’s an interesting idea, what that means to the character themselves and how they interact with the story. But without some background and understanding, something can be lost in the translation.

To consecrate her place in the convent, a nun takes vows of obedience, poverty, and chastity – to always obey the Mother Superior, to take no more than what she needs to subsist, and to never defile herself or others with indecent acts. Sister Verity takes these vows in the late 1800s, at the age of eighteen. The demon that lurks in the cloister is going to take both pride and joy in making her break them.

The work is mainly a tale focusing on Verity’s corruption by Anomaly and all of the trials and events that mix themselves into what happens. The story tends to wander from dreams to reality and back again, which I thought worked well. The erotica is simmering throughout the story, not really catching fire for the characters very often. But that’s less important than the telling of the story which is well done overall. There are a few places where the story trips on a thought and needs some time to get its footing again.

The succubus and incubus of the work, Anomaly, is very unique in their form and character. Not satisfied with either gender, they shift from one to the other often and quite easily. As such, Verity is tempted from all sides and her downfall is somewhat unavoidable in the end. Anomaly is a bit of a shadow however, there’s not really much time spent in telling of her wants and needs, her past is left a mystery. Given how unique they are, it’s something missing in the story that would have been nice to see.

Anomaly is quite a unique being and I wish the story had spent more time on exploring her dual aspects. That’s really not the point of the work, but it still would be something to explore and understand where they are coming from. Something different of a story and it’s interesting in being so.