Act Without Words by TeraS

This costume might be better off in a fire

A Review of Apartment 29 by Jules Hunter 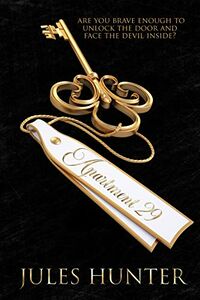 Some of the most interesting stories are those in which the main character doesn’t know that much about themselves. It becomes a tale of discovery, mistakes and missteps through which, in the end, the character figures out who they are and what they want. The thing is, the finding isn’t always as good as the having.

When that becomes something lost among the plots taking the character there, it might leave something to be desired.

Are you brave enough to unlock the door and face the devil inside? Nymess or The Devil’s Playground as some of the whores like to call it was my salvation. The one place I could be myself and feed from willing clients without judgment until overhearing a conversation changed my life. Mates, mafia, a hit, and sexy men turn my world upside down. What’s a poor whore to do when secrets are revealed and I learn my perfect life is nothing but a sham. Come to Apartment 29 and I’ll tell you my story.

Jade’s life hasn’t been easy, not from the moment she was abandoned by her parents to the moment that her world was turned upside down. Being told you are a succubus, and a siren, is a shock, but being at the focus of those vying to be your mate isn’t as much fun as it sounds like.

The work is, overall, focused on Jade and her trying to come to terms with events that are spiraling out of control around her. Some of that is due to her own nature, some by the situations she is placed in. In spite of the temptation of her becoming a lost lamb in the story, her personality and character doesn’t fall into that meme and I was pleasantly surprised to see that. Occasionally single-minded and almost always speaking her mind, those around her discover that Jade is more than she seems which then brings into play the events that drive the story onwards.

There’s a lot of conflict as the story progresses and that does help to draw in the other main characters, setting them on a path which leads to Jade herself. I’m not sure that so many characters were needed to tell the story however. At times the shifting between characters become somewhat confusing and there are points where if felt like something important was lost in the perspective change.

Regardless of that small nit, it’s an interesting story of discovering oneself and all that comes with doing so. A bit uneven at times but the characters are very good and the story is told well overall. It might be a little too complicated in some aspects which tangle the story from time to time, but it’s still a captivating read.

I’d like to see a follow-on work about Jade, mainly to expand the succubi and incubi lore in this story universe. I think that’s a bit untapped here. Beyond that, perhaps a bit more time spent in telling Jade’s story between high school and when she ends up at the beginning would be interesting to see how she learned and dealt with her abilities. There’s a lot good here to tell a story around and it should be.