There’s a lot left to be desired in this costume

A Review of Deal with a Demon by Fae Owens 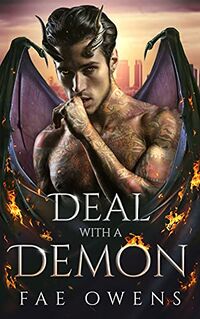 Deal with a Demon by Fae Owens

Sometimes telling a story gets really complicated. There’s so many moving pieces, plots and plans which can press the main characters into not quite being all they are meant to be. Many times that comes with the surrounding characters needing their moment to shine.

A review then of the first work in a new series where Sin City’s name is just the beginning.

After years as the Demon King’s pawn, Zeke is out for blood. He can’t let his boss live, not if he wants to be free. He needs a plan. A way out. And when he catches a succubus burglarizing his patch, he knows just how to get it.
Delilah doesn’t know what’s scarier—her sexy new roommate or being roped into taking down the King of Las Vegas, but she can’t back out. Not while her family is depending on her.
But Zeke is keeping secrets, and she can’t tell if he’s trying to get in her head or her pants. She’s got one trick left—her magic. If she plays her cards right, she’ll have him wrapped around her little finger.

Zeke has had enough and if that means going against the Demon King of Las Vegas, then that’s what he has to do. But every plan needs an edge and encountering Delilah offers something unexpected. Hopefully they’ll both manage to figure out the plan and themselves before it’s too late.

The work revolves around a heist, an adventure and the coming to terms of Zeke and Delilah with themselves, their needs and what really matters to them the most. It’s rather complex in the storytelling, there’s a lot of characters that come and go throughout the story. That said, the interactions are well written and I enjoyed the snark between the characters.

While Delilah is the succubus of the story, she’s somewhat more of an adventuress than a succubus. I do like her character, her moods and the emotional impact she has in the story. But there’s really not enough succubus seduction and more of her getting into various bad situations and fighting her way out of them.

Overall, as much as I liked both Delilah and Zeke, the story felt rushed at times, there’s a lot of moments when the story is a battle royal and not really something in which there’s a lot of depth past the surface fighting and arguments for my taste.But once past those moments the story was delightful, there character development is very good.

It will be interesting to see where the series takes things from here. There seems to be a lot more about Delilah to explore and perhaps there might be an opportunity to delve deeper into her past. The work is a delight to read, there’s a lot of good things here, I just feel like something more as to Delilah’s past, more so her future, will be something to read about.