A Review of His Soul to Keep by Rheanon Nicole 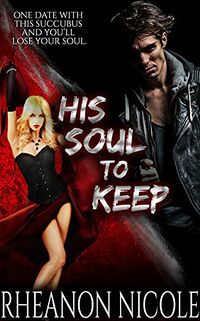 His Soul to Keep by Rheanon Nicole

Character development matters in storytelling. A character that doesn’t really learn anything, or for that matter, tends to be focused on themselves and not much else I think is rather boring and does nothing to make the story progress. Self absorbed is one thing, but not giving a care about what’s going on just doesn’t make for a good read.

A review then of a work in which the main character begins as being less than interesting, but over time actually discovers there is something that matters besides themselves. Perhaps they don’t completely redeem themselves, but at least they have a chance.

Meet Holland: A beautiful, evil, sassy, and shamelessly shallow heiress. After her unfortunate accidental death from a drug overdose, she was cast down from heaven for her stubborn inability to repent from her unashamed sins but spit back up from hell for her remarkable ability to drive her new master, Lucifer, insane.
Holland was sent back to earth to do what she does best; collect men’s souls to add to the devil’s army of darkness. But she hasn’t been sent back alone. A tall, dark, and irresistibly handsome demon named Roman has been assigned to escort her and protect her in case her wicked ways get her into too much trouble. Being in the city of angels, there’s bound to be some hang-ups.
One date with this succubus and you’ll lose more than just your morals. You’ll lose your soul. Holland is too much to handle, even in the underworld, but Roman might just be the one to help her change her evil ways.

Holland is self-absorbed, cares little for anything but herself and is rather proud of it. But eventually one’s life is judged by both heaven and hell, Holland finding that she can’t get into heaven and hell isn’t exactly what she wants it to be. But there’s one thing in hell that she does wan and his name is Roman. Perhaps in finding something to do in hell, she can figure out not only herself, but what really matters when a choice has to be made.

The work is at its core a journey for Holland to try and figure out herself, her needs and her future. Considering how self-centred she is for most of the story, that’s a very large ask for her overall. The problem for her as a character seems to be that she really has no interest or desire beyond herself. Now, that’s an interesting place to start a character story wise and it should be a means to drive the character towards something better for themselves at the end.

Lilith is mostly stereotypically evil, her character is barely touched on as the conflict goes on. She’s a means to an end and as such there’s a bit of hand-waving that happens with her with regards to her background. That’s a shame because Holland has no idea who Lilith is and getting that story out would have added something, at least given more depth to the story.

Roman, the love interest of the work, is the focal point of the story and how things develop with him, Holland and Lilith I think was really well done. He’s interesting, has a very strong personality, and given that Roman is the one that becomes entwined with Holland and Lilith, he works well as their focus which makes the resolution of the story feel right.

The writing is very good, save for some points where expanding on the characters and their story really didn’t come to pass. It’s a bit of a shame that when Holland comes to figure out why she’s in hell and what she’s trapped in, that her end goal just seems too slasher movie like. I understand why it had to be, it does make sense, but the emotional context just seemed flat in that part of the story.

The change within Holland from the beginning of the story to the end does a lot to make things worthwhile. She’s not perfect by any means, she’s very much her own soul and that does work well. The ending does reflect that she’s not all good, perhaps not all bad, but she does make her own choices.

I’d like to see a follow on story about what comes next, there’s a very obvious path at the end of the work that points towards that. But if that comes to be, perhaps spending more time on Holland being self absorbed and more involved in the world around her might be interesting.

There’s quite a lot of story left when things are done, which is a shame. Holland could have been more aware of things over time instead of what happened and I think that would have helped a lot. An interesting story about wants and needs and I think it’s well worth a read.