Succubi Image of the Week 714

A Review of Succubized Sister by Roy Revell 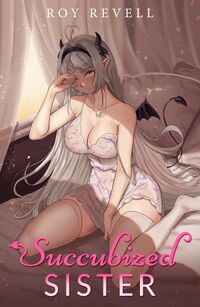 Transformations that occur in many stories happen for the sake of getting to the erotica and not much more. But a story in which there’s a good, valid reason, one that drives the story forwards and, most of all, expresses that things happen when there is no other choice is something special.

A story then in which family matters in making a choice and the consequences that come.

Caleb’s younger sister Tamsyn is bedridden with illness his alchemy cannot cure. Desperate, he brews a forbidden potion from an ancient book. Tamsyn regains her health but transforms into a succubus before his horrified eyes. She is hungry for her first meal—and Caleb is the only one man in sight.

There is only one thing that matters in Caleb’s life. Having lost his mother, soon his sister will succumb to her illness and he will be alone. But he is not without hope, and in giving up something precious for a chance for life, Tamsyn will be changed forever.

The work is for the most part a fantasy story with a succubus transformation creating the climax and shift in the story towards a bit of erotica. It isn’t focused on the erotica for the most part, though when Tamsyn becomes a succubus, her personality and needs drive the story in that direction. Overall the best parts of the story are Caleb coming to terms with making a decision and following through on them.

The other part that works really well is the relationship between Caleb and Tamsyn. It’s emotional, the toll on both of them really comes out. I liked how much the story depended on that need, that desire in Caleb to do what he had to in order to save Tamsyn’s life.

Tamsyn, once transformed into being a succubus, isn’t quite the same character. She changes quite a lot, like her physical form, and that leads the story towards a bit of taboo erotica. It isn’t however written poorly or didn’t work with the characters. Perhaps it’s more accurate to say that Tamsyn isn’t Caleb’s sister at this point of becoming and as such there’s a bit of a power dynamic shift as well. Regardless, the story is told well.

The dialogue is very well done, the erotica has a bit of heat in it. The story is quite involved and when the moments come for Caleb to turn towards options that aren’t the best, he struggles with them. There’s a clear understanding that it’s a bad idea, but in the end, there really wasn’t any choice.

I’d like to see something beyond this work, perhaps there’s a means for Caleb to transform similarly to his sister as a thought. Beyond that, telling more of the story about Tamsyn coming to terms with herself I think should be examined further. She doesn’t need to be what might be expected of her, but seeing how she deals with her new reality I think is a story unto itself.