Such an inspiring costume isn’t it?

A Review of Money Honey by J. Manfred Weichsel 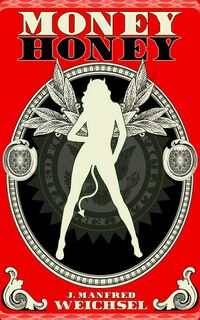 There are some stories about Succubi that are exceptionally unique. By that I mean the mythos of the succubi is the start of an unexpected story which brings with it something thought provoking. It also might, given the chance, offer something of a theological question to ponder.

A review then of a story in which money might not be the root of all evil, but for succubi it’s most definitely a curse.

He can have all the devil girls in the universe, but can possess none, as he searches the cosmos for the one he loves.

Money comes in many shapes and forms, for the universe is vast in its needs. An encounter with a succubus leads one man to discover a secret, a need, and a goal that drives him towards the impossible.

The work is an interesting mixture of erotica, theory and idealism which come together to tell possibly one of the most unique stories I have read in some time. The concept of succubi being used as money is somewhat odd at first, but as the story unfolds here’s a certain logic in what happens.

There are a number of succubi characters throughout the story, but they really aren’t dwelled on much, there’s not that much to their characters and overall they are a means towards pushing the central character of the story onwards.

The erotica in a similar way doesn’t have a lot of heat, is mentioned more in passing overall. Again, it’s a means towards an end and it does so well.

The story is mainly about the main character and his search for one particular succubus, the curse upon him, and where that all takes him. It’s interesting from a story perspective, there’s a lot going on in that. But there’s something missing and I think that’s mainly in the writing which could use an editing pass or two in order to make the story read better overall.

There’s an interesting story here, it has promise, but with how things read the story is just a bit difficult to get through. How things end is a bit sad as well, but there’s some hope nonetheless.

I think expanding the story further, giving the characters more depth and telling more of how things came to be would add a lot here. Still, it’s a unique and interesting read and something to think about.