A Review of Seduced By Moonlight by Vivian Blake 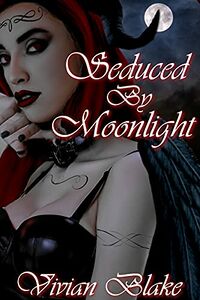 Seduced By Moonlight by Vivian Blake

Succubi and angels in love is a delightful story to tell. The thing is, just having the story be a simple good and evil based theme really doesn’t do the characters justice.

But if the characters are the focus, and that allows them to become more than where they begin, it gives the opportunity for something amazing.

Selene has had a rough time lately. None of her assignments are panning out and she’s worried her Master will subject her to punishment. She decides to spend a few hours drowning her sorrows at a local bar and prolong her punishment as long as possible.
Lucian has had a great week, the best. He decides to check in at the local bar and see if he can help one last soul before heading home. He never expected to find her, a demon on a dark path of self loathing. Though he doesn’t know what she is yet, he soon finds out but still wants to help her if he can.
The chemistry between them becomes so strong, neither can stop thinking about the other while they are apart. Their respective sides urge them to stay away but can they? Should they? Is their love strong enough to keep them together even when the world around them is threatening to tear them apart?

Selene’s life as a succubus she once enjoyed, but of late she’s unhappy about everything. A chance encounter with the angel Lucian brings them both to question their worlds as they are drawn together. But love isn’t for succubi and angel’s can’t be with them. Or can they overcome the will of those above them to find what they both need most of all.

Selene, the succubus of the work, is complex and her need to be something more drives the story in unexpected directions. She can be evil, can be kind, she’s many things as she needs to be, but it’s when she can be true to herself, to not have to hide herself as she must otherwise do, that the depth of her character comes out. Asking the question why things are matters and it drives her onwards which adds so much to the story.

Lucian is wonderful in how his thoughts and questions ask of Selene a seemingly simple thing. Why not? That’s the catalyst for change and it brings about the turn needed in the story. Overall his actions make sense for him, they tell much about the viewpoint of the angels. It’s when he must decide for himself that he truly becomes wonderful.

Rayna, the other succubus character of the work is a bit too stereotypical for my liking overall. She has to be, of course for the sake of the plot and storytelling. But there’s too many points where her actions are really done in spite and nothing else. Again, that’s for the sake of the story, but I’d have loved to know more about her. It almost feels like there’s an issue between them and it’s never really gone into. There’s also something that happens at the climax of the story with Rayna which is vague and leaves me wondering about her actions and why she did things as she did.

A lovely story about a succubus and an angel finding love and how that changes their world. I really would have liked some clarity over what Lucian does to himself, why Rayna made the choice she did, and just what the result for Selene is at the end of the story. A lot of questions which leave a lot of story untold.

The work needs a sequel honestly with how things end. There’s a lot of dangling threads and questions that aren’t quite fully realized. Beyond that it would be nice to see where Selene and Lucian wind up after all they have been through. There’s a lot of good things to explore and I hope the author will consider doing so.