Succubi Image of the Week 712

A Review of Against the Grain: A Human’s Guide to Wooing an Asexual Incubi by Nikole Knight 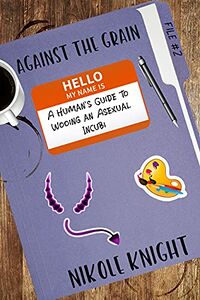 Against the Grain: A Human’s Guide to Wooing an Asexual Incubi by Nikole Knight

Sometimes one’s own needs are, sadly, overwhelmed by their family. It’s a very poor thing to do, it causes no end of harm. It’s especially sad when one’s heart cannot be true to itself.

A work then today in which the needs of two outweigh many. For in that understanding comes the one thing that cannot be denied for anything else.

The first step to recovery is admitting you have a problem. Ellian has a problem, and his name is Felix Masters. When Ellie, a high society male succubus, joins Against the Grain, he has a foolproof plan: attend the support group for supernatural misfits, figure out how to correct his… abnormality, and then return to the Incubi compound to join his betrothed. For once in Ellie’s suffocatingly controlled existence, he will bring honor to his family name, regardless of the personal cost. As long as a certain awkwardly sweet human does not ruin his carefully laid plans.
Felix Masters has a problem, and his name is Ellian. Felix never meant to crash into a therapy group for magical oddballs, but that single stumble changes his world forever. Magic, glamour, and succubus tails are only the beginning, and when faced with a skittish Incubi dead set on self-destruction, Felix is determined to change Ellie’s mind and, with a little bit of luck, capture his heart as well.
An asexual succubus trapped by fate and expectation. An insecure human desperate to set him free. Join Felix and Ellie as they find acceptance, courage, and unconditional love in the one place they never expected: each other.

Ellian, much happier to be called Ellie, is a male succubus with a number of problems, not the least of which is his mother, then dealing with his own self-confidence among other things. A help group meeting with other supernaturals brings him to meet a mortal named Felix. Sometimes a mistake isn’t one when a missing part of oneself is found.

The work is a wonderfully told story of needs and wants that envelop Ellie and Felix. While some of the moments are funny and teasing, there is a sense of the undertones that Ellie has been living with through his life and the toll it is taking on him. There’s a lot of emotional impact throughout, it’s very much a rollercoaster for the main characters to deal with.

There is a scattering of erotica, but it isn’t really at the core of the story, It varies somewhat, many times being a passing moment, but there are a couple of intimate and telling encounters between Felix and Ellie that tell of how good they are together.

The difficult part of the story, for Ellie and for the reader I think, is reading about his life as a male succubus, what his family demands and how much it hurts him. There’s a point to this, it does come through and press Ellie to make a choice eventually. Some of the hurtful things that others say to him are deeply sad, far too demanding and soul destroying. It’s disappointing that there’s so little care in the world Ellie comes from.

An emotional read, the trials that Ellie and Felix make their way through are just wonderful. They may each have their flaws, but together everything fits together just fine, Well worth a read for the joy, the tears and a view of succubi and incubi that is thought provoking.

While part of a series, the work can be read as a stand alone for the most part. It’s a fully realized story with characters that have a soul and a need to be told. Well enjoyed and a delightful story.