Succubi Image of the Week 711

A Review of The Alphas’ Proposal by Sassy Abigail Anders 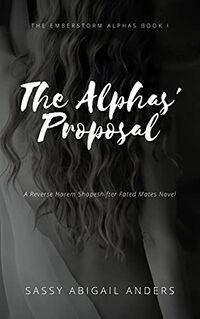 It does make sense from an erotica perspective to do so. The thing is, many stories don’t really have a strong enough succubus to tell the story. A review then of the first work in a new series in which the main character, who is a succubus, is well able to deal with the challenge that confronts her.

Scarlett Sterling works as a caregiver at the same orphanage she was raised in. After years of rejection by potential parents simply for being what she is—a succubus, she has become jaded and emotionally disconnected from everyone save the children in her care.
But now war is threatening Emberstorm and even worse it is affecting the children at the orphanage—her children. Enter the alphas of the four shifter tribes: the friendly wolf who dreams of peace on Emberstorm, the arrogant dragon who hides his own insecurities behind protocol, the surly lion who masks his heart with growls and snarls, and the lovesick bear who wants nothing more than to claim Scarlett and mark her as his. They have a proposal that could have the power to end the coming war once and for all. All Scarlett has to do is say yes… and get the blessing from the Councils of Elders. Are they doomed to fail or fated to succeed?

Scarlett’s life has revolved around the orphanage she grew up in. A succubus doesn’t find a family or love often and she’s come to accept that. Refusing to give into her succubus nature, needing to protect the children around her now that she is the elder of them all, her life seems set. But there are others with needs outside her walls, a world that she can make better if she’s willing to try. Perhaps even for someone like her, there’s a possibility to be happy at last and find love.

The work is a wonderfully detailed fantasy/erotica story which tends to focus more on the relationships that build over the course of the work. It does focus on the main male characters as a whole, being that they structure the story and lead Scarlett along her journey. It’s a bit perhaps too focused on them much of the time and when Scarlett comes to the fore, that’s a wonderful change and refreshing overall.

Scarlett, the succubus of the work, has a very strong personality, she’s very much unafraid of those around her and is not at all shy about defending herself and those she cares about. The single part of the work that told the most about her was her moments with those in the orphanage. Her concern, the way she dealt with the challenges and, overall, acted very much as the mother to the children was simply beautiful. Once the story presses onto her encountering the four characters she is being asked to be the mate to, that’s when her true strength comes out. She’s not a frightened thing, she’s not an evil being. She’s simply a strong willed woman that happens to have a succubus nature.

I thought that how Scarlett has dealt with her needs, the preference she has of doing as little harm as possible is quite telling and unique. A succubus who’s nature doesn’t control her leads to a far better story overall and Scarlett is very much that.

Scarlett is a very strong succubus character and that’s important considering the vast number of male characters she has to deal with. There’s a lot of good storytelling, a lot of promise for the series. Hopefully as things unfold going forward Scarlett will remain true to herself and her past. It does matter and it makes for a far more telling story.