Act of Faith by TeraS

A Review of Impossible Castle by M. Gregg Roe 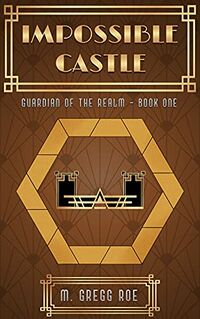 A review of the first book in a new series today on the Tale and it’s one in which one of the main characters is a Succubus with all the trials and issues that brings.

It’s a delight to discover a story in which a succubus is more than what she is. It’s telling when her nature battles with her needs and how that is overcome. Perhaps in telling that story something is revealed about the story universe as a whole which otherwise couldn’t be.

For our young guardian, it’s a real concern. People are relying on her. Okay, most of the inhabitants of Andoran’s Realm don’t even know she exists, but it’s still her job to protect them. Well, one of her jobs. She’s also teaching martial arts and helping to raise her orphaned cousins. Life is complicated. Anyway, it’s her first real crisis, and she’s anxious to prove herself.
Fortunately, our powerful but inexperienced guardian is not alone. She has friends she can rely on for help and advice, including some who are seasoned adventurers. Of course, they have their own issues to deal with, especially the one who’s half demon. But who doesn’t have problems?

A tale of adventure and mystery surrounds a small town and those that live there. But as well, day to day life, the needs within, and the questions of life itself to be answered are not to be ignored. Among all of the strings being pulled one thing is clearly needed. Friends that can be counted on that matter.

The work is a mixture of fantasy, adventure and mystery told amazingly well. There are a vast number of characters, but they are all used and combined to tell the story in a way that none are really set to the side. The story universe is complex with its own mysteries that tempt and bring questions throughout and I rather enjoyed that complexity.

All of the characters are well rounded, have a clear voice and throughout they are both learning about their world, but also about themselves. There are many fantasy brings such as elves, orcs and others, but the one character that I found the most enthralling is the succubus of the work, Aliva.

Aliva is far more than the succubus she is, and that comes from her intelligence, her thoughtfulness and everything her soul is entwined with. The teases about her background, and how she met her husband brought me a wonderful smile. She is powerful and the display of her abilities is told well and doesn’t seem out of place with the rest of the work. But it’s the darker side of Aliva, what she is asked to do in the town, and what that means in order to keep herself in control that spoke volumes about her. Her personality and form are perfectly succubus in nature, but it doesn’t overcome her good sense and reason which I dearly enjoyed.

Well written, the mystery is telling, and the world itself is created to allow good storytelling to unfold. The author clearly loves telling this story and has invested a lot in their characters. Well worth a read for those that enjoy intelligent fantasy works with a dash of a succubus that isn’t stereotypical.

I simply adore Aliva in so many ways. A lovely, complex and telling story by far, but Aliva is the glue that, for me, holds everything together. Perhaps in time more of her past will come out, certainly her destiny will be a delight to behold. I look forward to the next work in the series with wonder and hope as a result.