Succubi Image of the Week 710

A Review of Demons & Dynasties by Luka Fallon 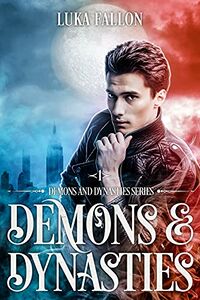 It seems that stories using succubi as a means to drive the plot onwards, or drive two characters together, is becoming something of a meme.

The thing is, using them for a few pages and then tossing them aside leaves quite a lot of story possibilities behind. It’s a bit of a shame, and brings up the question of whether or not the succubus really mattered in the first place.

Vince James is living his worst life. As the youngest son, forced to hold his father’s empire together, Vince knows nothing about Manhattan or the world beyond his father’s control.
Damien Blake refuses to be what anyone expects. Inheriting his father’s enterprises at a young age forced Damien into the cut-throat business world and the realization that everyone prefers his money to him.
Will a rash act of independence bring doom and destruction or desire and destiny? Can Vince and Damien learn that both demons and love are real in time to save each other?

Vince has it all and at the same time nothing at all. Family is family, no matter how painful that may be. A chance encounter brings the possibility of something better, if he’s willing to take a chance on them, and himself.

The work is a male/male romance adventure with a bit of erotica around the edges which is a lovely read from start to finish. The story is interesting, the characters fit together well. Overall the story has depth and allows the characters to grow throughout.

There is the appearance of a succubus in the work, but it is minor and fleeting. She is never named, really does and says very little and is mainly there as a means to trap Vince and put him in jeopardy. She is interesting, perhaps even tempting, but she’s a shadow otherwise, vanishing in a handful of pages. There’s little said about her physically, her purpose being done she vanishes into the pages of the story never to return.

This isn’t a work about succubi or incubi and it’s a bit of a shame the succubus is never named or her role goe anywhere. That said, the story overall is interesting and seems like a good lead to the larger series. Perhaps at some point succubi or incubi will appear in a larger way, but it seems unlikely.