It’s shiny, that should be something positive… right? 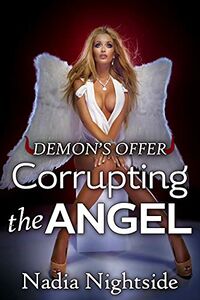 A review of the third work in the Demon’s Offer series today, a series that overall really hasn’t been too appealing for me. Still, there could be something to turn things around, to make things better and perhaps that starts with this work going forwards.

But that brings the question of whether or not the main character can get over themselves or, perhaps more interestingly, the succubi take over.

More than anything else, Mona wants to be a superstar. She keeps her virgin body tight, hard, and in perfect shape so that when the cameras start snapping photos, she’s permanently ready. It seems like her big break just isn’t going to happen, but when she attends a mysterious audition, everything starts to change. Some of the world’s most famous beautiful women are there–all of them busty, fertile, and gorgeous–and they’re given an offer to give up their souls for immortal beauty, wealth, and privilege. All they have to do is worship a demon and become his evil, sadistic succubus pets–and help him corrupt an actual guardian angel from Heaven. Mona knows this is insane–knows that she wants to be a good person. But with fame and fortune tempting her fertile, luscious body so intimately, will she be able to resist?

Mona wants to be a superstar, and if that costs her soul, what does it matter? But there’s something else wanted from her, that being her guardian angel, and what difference could that make if Mona gets what she wants?

The work, as a whole, follows on from the prior stories in the series, mainly being seen from the main character, who still constantly talks about his sexual prowess and gloats over those he’s corrupted. That really is the part of the series that holds little interest for me, being rather boring and stereotypical.

Mona’s fall is overall nothing remarkable, her guardian angel’s struggles are a bit more interesting, but it doesn’t really go far enough, or expresses any sort of transformation, which really would have been that little extra touch of corruption that would have added more heat than there is.

Overall this part of the series has some purpose behind it, and perhaps the succubi might be setting up the main character for a fall. Honestly that would be probably the most interesting twist there could be. There’s a lot going for Zara, she’s more evil and darker than the main character, but more, she’s cunning and that is far more interesting. It’s something to consider as a whole to make this series far more interesting and get past the amount of self reflection that runs throughout.

Something more than the series has been in the past, perhaps there will be a twist in the tale that turns this from being one being’s evil plans and into something more. There’s enough succubi to do that, and really considering the main character’s self-focus, that wouldn’t be hard to do.