Succubi Image of the Week 709

A Review of Demon Season by Elizabeth James 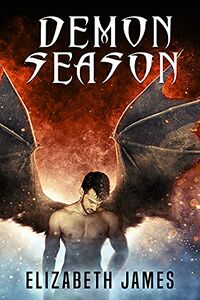 Telling a story in which the universe is at risk, that there might be a disaster waiting nearby isn’t always as interesting as telling the story of what one’s soul and heart desire and what happens when those needs are challenged.

Perhaps within that question one can find answers, given the right one to offer them.

Being a demonborn on the eve of his first demon season can be stressful, especially for Taylor, who’s always felt that he doesn’t quite fit in. After a troubled youth marred by trauma, he’s finally set off on his own to college for a fresh start. So far things are going well, but soon demon season will start and he’ll have three nights to lure a demon to him so that they can bond. The demon will feed off him for the rest of his life and in exchange, he’ll gain the demon’s protection. But every demon is different, and he wonders if he’ll even be able to bond with one.
As his first night comes, he finds himself in an unusual situation and before he can think, he’s bound to a demon he knows almost nothing about. When his demon reveals himself to be the prince of demons and an incubus, Taylor is forced to confront his own past and his repressed sexuality in order to give his demon what he needs to survive.
Trying to fit in on campus while bonded to the prince of demons is difficult, and being with an incubus even harder, and Taylor has to find the courage to move on from his past and embrace his future.

Taylor needs to find his demon, the part of himself that has been missing as long as he can remember. A chance encounter brings a choice unexpected. But with the arrival of Gabriel comes a question of truth, need and, in the end, passion.

The story reads very well, the characters are fully realized and the emotions told feel true to them. It’s a complicated story, the truth of things being wrapped in mystery and misdirection, sometimes to the point that the story itself stalls a bit before moving onwards. That said, the plot is very complicated and uses that to push the characters into coming to terms with themselves and their own sexuality.

There are various succubi and incubi characters appearing, the main incubus of the work being Gabriel who overall keeps his thoughts and true self very close to himself. Thankfully he’s not at all stereotypical, has some very unique personality traits as well. He’s thoughtful, which was a delight, but more so, he has a sense of mortality that was really quite refreshing. It’s a bit of a shame that the story takes so long to drive Gabriel to admitting what he seeks and what Taylor means to him.

The main succubus of the story, Callan, is delightful in her mysteriousness and similarly to Gabriel, she holds away her needs and true desires which does at times make her something of a block in the storytelling. She’s not evil as such, but a bit of a twist in the story that I think worked really well.

A good read, certainly absorbing in the paths that Taylor has to pass through. I’d have liked for more of the story of Gabriel and Callan, there’s some undertones that really don’t come out fully and I’d have liked more of that. Otherwise this is a lovely story of redemption, love and understanding that I enjoyed.

The work ends on a rather interesting note which really serves to deepen the mysteries of some of the characters. There is hope in the words, there’s a path for Taylor and Gabriel to pull their universe towards. It’s a question of whether their love can overcome all that pulls on them. I’m expecting a sequel at some point to appear, hopefully with something less of the world being changed and something more of two souls being as one.