It’s Not An Act by TeraS

A Review of Empath’s Lure by Jen Lynning 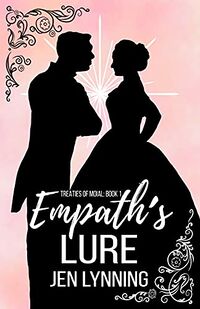 Creating a universe with depth and meaning to surround a story is important. There needs to be a reason why things happen, meaning to the events and, most of all, a way to draw the characters of the story together that makes sense and isn’t something that just happens for no reason at all.

In telling such a story, that universe can create its own desires and needs. Whether the characters submit to them, or take control, is where things get interesting.

An incubus reluctant to use his powers. An empath confident in her own skin.
His powers may not affect her, but there’s more than magic in play.
Lisca doesn’t want to be a part of Lhanaperi’s trade delegation. While she is heir to a powerful merchant family, she is on the negotiation team for one reason only—her empathic talents are the perfect foil to Khiran BeVelor, the Moialans’ not-so-secret weapon.
Being part incubus gives Khiran the power to engender more than just lust in the people around him. Too bad his uncle, the king, thinks his only use is seducing his opponents. Khiran plans to ignore his uncle’s expectations and rely on other emotions to gain favorable trade concessions for Moial. But when the empath detects his every lure–even those he didn’t know he used–seduction might be the only option.
But who will be the seducer, and who the seduced?

Dealmaking is an art and those who make the best deals sometimes become captured within themselves. Khiran seeks a goal, but his nature haunts him. Perhaps in the struggle with Lisca to make a deal together, there is something far more needful being fought over.

The work is a rather complex underlying story into which the needs and desires of the main characters come into play, and conflict with each other and the promises they need to keep. The universe building is very complex and I enjoyed the little touches which brought depth and life to those around the main characters. Beyond this, there’s a certain flair, a bit of delight in the background of the families involved which I think creates some telling moments as things progress.

There are a number of incubi and succubi mentioned, though the focus is on Khiran, the incubus of the work. He’s not stereotypical and it was refreshing in how he pressed against his nature and the needs of his father and family. Once he manages to be more focused on Lisca, that;s when his depth and personality really came to the fore. He’s unique and more he has a belief within himself that plays out over the story and in doing so there’s just that little bit more of wonder the author brings to him.

I would have liked more to be told about the mythos of succubi and incubi in this universe. There is a good bit of that, but at some points I felt as if it was skimmed over slightly and left part of the story untold. Perhaps seeing more of the nature within the larger community might have been interesting, if perhaps a bit outside of the work’s focus. Otherwise the writing is very good, the characters are not two dimensional and there’s a lot to enjoy.

Lovely universe building, both Khiran and Lisca as delightful characters and their dance throughout the story was so very well done. A lovely theme, telling characters and a touch of intrigue that work very well together.