Act of Goddess by TeraS

If all you get are the wings, why show the tail?

A Review of Moonlit Alexandrite by TL Hamilton 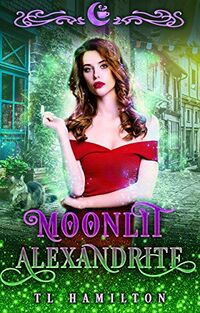 Many times a series will have one of the main characters be a succubus. That’s to say that the series isn’t focused on them as a whole, they are part of an overall ensemble of characters. They may only appear in one book, make their mark and the series moves on.

A review then of the second work in the series Moonlit Falls today. Not every succubus gets what they want, but sometimes along the way they discover it’s better to get what they need.

A kelpie, a satyr, and a fire salamander watch a succubus walk into a bar… My name is Lex, and while this sounds like the start of a bad joke, the punchline falls flat, just like my ego when I find out that not one of them is interested in me… even though my succubus insists they be the ones to punch my V-card. I’m not so sure.
I would drown my sorrows in ice cream and animal documentaries, but I have too much to do! I have big plans for Crafty Seductions—my new business venture in Moonlit Falls, but someone has it out for me and wants me to fail. Things are going wrong at every turn. Then, after an especially disastrous coffee date, these men are suddenly changing their tune. Is it just the magic? Or can I trust that this is real?
Dion—the Satyr who may just dance me off my feet.
Ren—the fire salamander who says I’m his greatest treasure.
Tase—the Kelpie who wants to devour me.
And me? I just want to teach people crafts.

Lex has a problem and it’s within herself. Being a succubus has a lot of good things going for it, but at the same time the need gets in the way of more important things. Like art, business, and trying to figure out which tasty morsel she’ll be nibbling on next. But among all of the fun, there’s a problem and Lex will have to deal with it far too soon.

The story is a mix of romance and mystery with a side of angst. Most of the characters are a bit lost, trying to figure themselves out and considering the setting, that works well. The emotions are quite real, there’s lovely heat in the romantic moments and overall it’s a lovely and fun read.

Lex is a bit of a contradiction as a succubus. She tries not to allow her needs to take over, to be more than just a succubus. Overall, she manages well in doing so, and it’s the struggle with herself that I really liked most of all. Lex is cute, fun and thoughtful which makes her path through the story a delightful read.

The writing is very good, the characters have depth and Lex, in all of her needs and cravings, is a fun succubus character. As for the men in her life, there are the occasions when the internal monologue seems a bit off, a little vacant. Given that most of the story revolves around the men seeking out Lex, perhaps that story might have been more developed.

As much as I liked the story, the characters and the plot, I just couldn’t get past the absolutely awful lines that Lex uses when she’s fully succubus. That’s a shame because overall she’s unique, interesting and fun.

But there’s only so many off colour pick up lines before I roll my eyes and start to skim. I’ll be checking on the series to see if there’s more succubi or incubi appearances, I’m going to hope that Lex’s character grows more, that would be fun to see.