Succubi Image of the Week 704

A Review of Love is My Superpower by Luna Blake 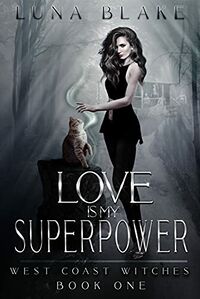 Love is My Superpower by Luna Blake

A review today of the first work in the Orion’s Bay Trilogy series by Luna Blake in which both succubi and incubi characters appear in what are minor roles.

There is a problem however, and yes it’s a matter of my personal preference in succubi and incubi being more than what they are expected to be. The story can be amazing, the characters interesting, but there’s a point where being evil isn’t good enough.

I did all the things an Earth Witch does while trying to avoid the past and not think much about the future: Bake cookies, plant flowers, hang out with Cheetoe, my feline familiar. Drink too much beer and wine. And then, she showed up. My worst nightmare wrapped in black wings and red lipstick.
The Succubus. And for some reason, she has it out for me and my town.
After a thorough thrashing from her leaves me bloody and unconscious, I wake up in the cabin at the end of the lane, staring into the blue eyes of my savior. And his super hot roommate. And his other hot roommate – that hates me for some reason. Oh, and his other hot roommate, who eats more chips than anyone I’ve ever known. Just me, four hot guys, and my snarky cat… and more than a few dark secrets.
From there it gets interesting. That peaceful life? Yeah, that’s not happening anymore.

Delia would rather forget about her past and try to make a better future for herself. But the past doesn’t forget, and it never lets go. A choice will have to be made, whether good or bad is the question that aha might never find the answer to.

The work is a well told adventure/mystery with sprinkles of erotica here and there. The characters are interesting, the plot holds up well and overall it’s quite a good read. Delia is a complex character, her more snarky moments are fun and I liked how she evolved through the story. The problem for me however is the succubus and incubus of the story.

They are extremely stereotypical as a whole. There’s not much in the way of personality, little in the way of seduction or temptation, the only thing that they represent is evil. They mainly are a means to force, with little finesse, many characters into betraying themselves, or others for the sake of the plot. I found that to be very disappointing overall. While they are not the core of the story, their development isn’t much beyond being evil.

Evil for the sake of being evil I find to be not very interesting. In this work the succubus isn’t anything more than that. Similarly the incubus is mainly evil, but there’s at least something he wants through all that happens in the story. But that’s not really creating an interesting character. There’s no nuance in either of them, there’s nothing really that makes them attractive either.

That is the point of course, they have to be evil, they have to be causing problems for the main characters. But there comes a point in the story, and for me it happened very quickly, that I started to skim over the appearances of the succubus because it just didn’t work for me.

As for the incubus, he was important to the climax of the work, he was more fleshed out as a character and that had some interesting moments. But even though he’s critical to the plot, he doesn’t really get past being evil and that’s a real shame considering the promise I thought he had.

I don’t really enjoy succubi and incubi being stereotypical and as a whole I felt they were. Perhaps there being less moments of them causing lust and more moments of seduction and manipulation would have been better. The story is good, and i’m looking forward to seeing where the series goes, though I expect there will be no further succubi or incubi appearing. But, the idea of at least the succubus making a return, and being more a temptress, and knowing more about her, would be interesting.