Act of Contrition by TeraS

There’s nothing to raise in this costume

A Review of The Warriors Of Rothenberg by Vivek Kumar 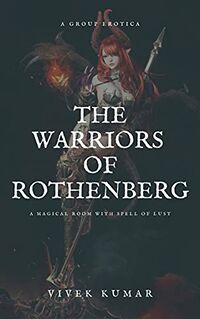 The Warriors Of Rothenberg by Vivek Kumar

Sometimes a story suggests there is a succubus involved in some way within the tale being told. There’s evidence of them being on the edges of the story, they push the characters to act in some way or other.

The problem comes when the succubus doesn’t actually appear, doesn’t have a name and just is an idea and not much more.

Five Friends (four women and a man) are on a journey for eliminating Demon from Rothenberg. After fighting lots of demons they are about to end their journey by eliminating the last boss Demon (Succubus). But somehow they end up being trapped in a room, where a spell turns them into beasts filled with lust and aroused. Rough, bold, and raw. The Warriors Of Rothenberg unfolds the darkest fantasy of four women and a man. It’s a combination of sensational lesbian, female domination, and group lust.

A quest brings a group of adventurers to confront the biggest challenge they have ever faced. But the powers of a succubus are many and the unwary can be trapped by their own desires.

The book summary mentions a succubus, and really there isn’t one to speak of. Her presence is there, the effects she has on the characters are there, but there’s nothing to be seen of her. She’s a thought, an idea and not a lot more. There’s no idea of her name, what she looks like or anything else. That’s disappointing as she is supposed to be the big bad evil creature of the story.

There’s only a hint of a succubus in this work, and really that’s only there to provide a means for the erotica that much of the story revolves around. I’m hoping there is a book to follow this one, that seems to be where this one ends and, perhaps, there will be a succubus making herself known.