Succubi Image of the Week 702

A Review of Sketchbook by Jack Chance 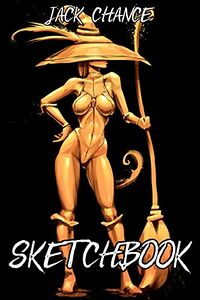 Some plot ideas offer a lot to consider overall. Something comes into the possession of the main character and things happen. Sometimes for good or bad, many times it takes away the plot the work started with and turns things to another direction.

That’s all good, but if what comes afterwards doesn’t have something in it to make the story worthwhile, or the ending leaves a lot on the table, there’s a problem.

When starving artist Mike went to figure model he was just hoping for some extra money and to ogle the hot artist Anna. Instead he ended up with a magic sketchbook from a mysterious new artist that can fulfill all his desires, even if those desires are three succubi.

Mike is struggling as an artist, but a chance meeting during a side job brings two encounters. A sketchbook given in one opens the door to unexpected possibilities and some of those are succubi.

Overall the story tells of Mike’s adventure from humble beginnings to the end of the world. The theming and storytelling at times has a strong anime flavor to it, but that just makes many of the characters that much more endearing. The pacing is very quick overall, there’s not a lot of time for reflection. As soon as Mike figures out what he has been given, and what he can do with it, he’s off to the races. And this opens the door to the succubi of the story marking their appearance.

The three succubi of the story, Bri, Yin and Rhe, are a lot of fun, being very much succubi in the most over the top anime ways possible. That’s not a bad thing, it makes them a lot of fun and there’s a lot to laugh over when they appear and Mike has to deal with them and what he’s created through the magic sketchbook of the story title.

There’s innuendo, humor, silly moments and a lot of other little touches that really make this feel like an anime story from the beginning. There’s a lot to like in that, all of the characters have aspects that make things delightful throughout. The erotica appears at several points, and it has some heat, but it isn’t too far over the top and while there are some moments that are silly, overall it’s still a lot of fun.

The problem however is how the work is brought to a close. It’s abrupt in how it closes, but more so, it feels a bit wrong and left me somewhat disappointed. There’s a plot thread at the beginning which I’d have expected to be drawn through the story, but it gets pushed aside too quickly. It’s a shame because it might have been a better story with the addition of that one character to be mixed up in Mike’s troubles. But she wasn’t, and the story just lost something along the way. Still, there’s some good laughs and fun to be found and overall it was a cute read.

There are succubi to be found, they aren’t stereotypical, but they aren’t the core of the story. The ending leaves a bit to be desired, it feels like there’s something missing. In the end it’s a fun read till the fun gets muted a little with the ending, but the succubi are cute and I enjoyed that.