A Review of Moonlight Becomes Her: Volume I: Issues 1-16 by W. D. Laremore 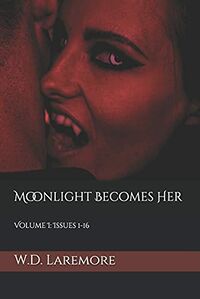 Moonlight Becomes Her: Volume I: Issues 1-16 by W. D. Laremore

Origin stories depend very much on the characters telling a story that is interesting, has depth, and doesn’t tend to overcome the meaning of the words behind a wall of things that aren’t really related.

Over the past year or so there’s been a series which follows the life of a succubus character and her efforts to find herself and it does bring me to pause and wonder.

A Cambion Succubus is a half-human female demonic entity that feeds on the life energy, and thrives on the sexual energy, of the men and women she seduces. Beware! Her kiss can give you new life, or take life from you… Lily Starlin, a cambion succubus, has a lot going on. Someone is trying to kill her, she’s bonded to a demon against her will, and she can’t find a cure for her amnesia. All she wants is to get her foot in the door to a fulfilling career, have a normal life, and be a good person. If all that complication wasn’t enough, she’s falling in love with one of her prey. What is a girl to do? Well, you have to read to find out…

There are questions in life that need to be answered. Who I am isn’t for some as important as why I am or perhaps more accurately how I got into this mess. Lily is asking herself all of these questions, and the simplest answer, that she is a succubus, isn’t answer enough.

This work was originally a series of short novelettes that were released over the course of a year and then bundled into a single work. It follows the main character Lily Starlin as she grows up, learns about herself, and then things take a turn for the odd. Becoming the herald of a demon, she then has to deal with losing herself. It’s that loss of self that tends to make the story drift as it progresses. Sometimes there’s a lack of focus, or it jumps between Lily having one personality and then a different one.

It does make sense from the perspective of Lily being a succubus and her powers shifting her form, but at the same time the story wanders when it turns away from Lily and focuses on other characters. It also, from time to time, drops some major characters out of the story and it’s uncertain as to why they were set aside. Even beyond these quirks the story doesn’t tend to have events tie together as well as I’d have liked them to.

That all said, there’s a lot to unpack in Lily through the story and it just seems to become more complicated the deeper the story goes. Even with teenage angst mixed with her succubus nature, there’s a lot of internal conflicts to deal with and the hurt that she needs to push through turns very dark sometimes.

At some points Lily acts like she has multiple personality disorder, which for a succubus is a very dangerous thing. She can be a friend, lover or something more in one scene and then turn so very darkly evil in the next. Again that’s interesting to see happen, but it might highlight a lack of focus in the story that need not be there.

There’s another major character that is very present throughout, being a thorn in Lily’s life and really being a major source of evil. They aren’t exactly likable, but they aren’t expected to be. Actually that’s true of a handful of characters in the story, but that’s a function of the plot and so it’s not unexpected. What I couldn’t quite enjoy was when Lily’s father appeared. I’d have liked to know a lot more about this incubus, more than the short appearance he makes.

Given that the original work was a series of short stories tied together at the edges, the series could use another editing pass to clean up some grammar, spelling and narration issues. That’s mainly to make the story flow better and read less scattered and more focused which I think really would make this work really shine.

Lily is a very unique character and there’s a lot to like about her overall. The story wanders a bit too much and it could be better if there was more connective story between the sharp story changes that occur. The author is continuing Lily’s story in another series of works, and perhaps in that will come a kind of closure for Lily’s trials and a means to find herself at last.