Succubi Image of the Week 701 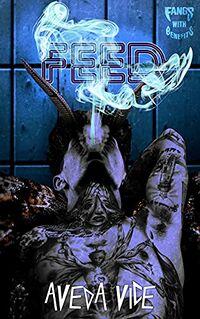 Not all stories which have a succubus character in them necessarily have the focus being on their nature or powers or what they are really capable of. Sometimes the story focuses more on the need within the character and what they truly desire.

his monster wants to get under more than just her skin… Avirin has a dirty little secret. She hates her fae coworker – but that’s no surprise. Not when Pye’s tattoos and easy-going attitude clash with her pencil skirts and rigid expectations. Those strict rules help her maintain a corporate appearance so no one catches onto the truth of what she is… A succubus, secretly scheduling the feedings she needs to survive. Imagine her shock to find Pye on her doorstep offering their services. Avirin should refuse, but the need to feed is growing stronger…and once she gets a taste of him, she’s not sure her hunger will be sated by anything less than his body against hers.

Arvin’s hunger is pressing on her body and mind, but the encounter she thought would fill her need turns out to be the one nightmare she never wanted to face. Perhaps she can get through this, perhaps she’ll survive his taunts. Perhaps she might never want to leave either.

The overall focus of the work isn’t on Arvin being a succubus, it’s clearly on the BDSM themes and other related thoughts and ideas which drive the characters in their encounter. While there’s a lot told about Arvin overall, there’s really so very little seen of her being a succubus save for a fleeting moment or two which does give interesting glimpses into her real form, how she survives and, most of all, the battle she wages within herself. That part of the work interested me as there’s a lot of Arvin’s character to explore as a whole. Perhaps it wasn’t as fully as it might have been, but then that wasn’t the point here.

It’s not really a succubus story at its core or direction. Arvin is a succubus, but there’s a lot in her character that I’d like to have explored beyond the heat and the hunger within herself. Perhaps there’s more to be found beyond that, it would be nice to see.