Act of Grace by TeraS 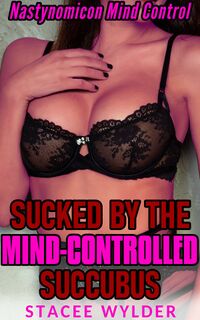 Sucked By The Mind Controlled Succubus by Stacee Wylder

A review then of the first work in a new series which seems to fall into the trap of being focused on the sex alone and that’s disappointing.

I’d been having a lot of dirty thoughts about my mom, sisters, aunt, cousins… Anyways, I was browsing the internet for people’s dirty incest stories, when a weird book got mentioned many times. The Nastynomicon. Apparently it had powers to make women do whatever you wanted them to. And one of the pictures looked just like an old book in my attic, but what secrets did it hold? And who held them?

The work reads in the tone of a low budget porn movie sort of way. There’s really little plot, there’s no character development to speak of either. The story mainly focuses on Mike’s sexual fantasies until he reaches the point when he discovers the book and then the succubus Azurabella appears. She is, thankfully, not really evil, more concerned about getting what she wants from Mike and leading him on the path to using the powers of the book to get what he wants. She has a very cute and seductive personality which teases more than anything else until Mike figures out that she’ll have sex with him and then things go a bit off the rails.

There’s no heat to speak of in the erotica, it’s mostly a lot of moaning and various sex positions until finally the pair are finished and then Azurabella vanishes. It’s a bit of a shame because within her teasing there’s a lot of plot points being told, any of which could have been expanded on more than they were. Still, the point of this book is to begin the series and in that the work does introduce all of the characters that will be appearing and gives hints to what will likely be coming next.

But the problem is that it’s too weak in the storytelling, the dialogue is bland much of the time as well. One more editing pass to bring some life into the characters would do this a world of good. As this is the beginning of the series, I hope the mind control aspects are more detailed, or at least more interesting as well. A snapping of fingers really doesn’t do much for the story. It’s better when there’s some sort of inner conflict to add some good verses evil aspects and make the characters choices have impact to themselves and others.