A Review of After I Break by Melissa Sercia 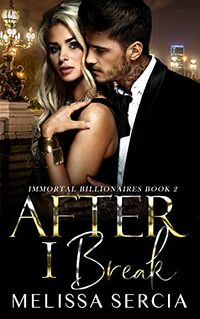 After I Break by Melissa Sercia

Something that I’ve noticed from time to time in a lot of works is that they tease about a character who has a lot to do with the story, but they don’t come into the story. A word or two, perhaps a flashback and then there’s not much else said. The thing is, sometimes that character could have made the story turn unexpectedly if they’d appeared… and you wonder.

A review then of a work in which there’s a presence that rules over the story, but doesn’t appear. Perhaps that’s for the best, but it still makes me wonder.

Piper: Broken. Cold. Ice princess.
Hunting magical artifacts leaves little time for love. And I prefer it that way. Love never did me any favors. I have a great career, a million dollar apartment in downtown Manhattan, and the freedom to do whatever I want. Until I meet Lux. He’s sexy, mysterious, and the most arrogant man I’ve ever met. And now we are being forced to work together. With both my career and my heart on the line, I could lose everything if I give in to his seduction.
Lux: Demon. Liar. Dangerous.
I’m an immortal incubus who feeds off sexual energy. Love is just a nightmare disguised as a fairytale. I learned that hard lesson a long time ago. Until I meet Piper. She’s spoiled, self-absorbed, and one of the most stunning women I’ve ever seen. Which will only complicate things. Her very presence is a distraction. I should be focused on the artifact but all I can think about is breaking her and making her mine.
As Lux and Piper fly all over the world in search of the missing artifact, their hunger for each other grows, but so do their secrets. And they aren’t the only hunters after the prize. With danger lurking around every corner, Lux and Piper must rely on each other more than ever. But how can a demon and a mortal woman learn to trust again when both of their pasts have left them broken? And when Lux’s old rival resurfaces, putting their lives in even more danger, Lux will have to make a choice—preserve the artifact or protect Piper.
When hate turns into desire, can it ever become love?

There are some things that should remain lost to time. But the appearance of a book with secrets that could change the world brings Lux to search. But it also brings Piper into his world and whether Lux likes it or not, not even an incubus can hide the truth for long. But then neither can Piper.

The story is a mix of an adventure quest mixed with a bit of romance and self-discovery. The plot is convoluted, it tends to stray on occasion, but that’s not really too much of an issue. Eventually when the truth of the main characters comes out however, it is a bit of an eye rolling moment.

Really the plot that drives the story is less important than the two main characters, Lux and Piper, figuring out their wants and needs. That is a very rocky journey and as it moves forward, it’s just as often being turned on its head. There’s one point where the fighting between them comes to an abrupt stop and then the romance begins and it bothers me. The shift is so quick and it seems odd overall, but then the story rushes onwards and there’s little time spent considering it.

Lux, the incubus of the story, has a lot of depth to him, but that doesn’t really get brought out well in the first half of the work. He’s holding much of himself inside and it just serves to build a wall between the main characters. It’s also a bit bothersome that his nature keeps getting his thoughts sidetracked as much as they do, again making him somewhat less likeable until that turning point I mentioned earlier happens.

Once the main characters become tuned to each other there are moments of joy and fear, both within themselves and otherwise, that serve to finally bring out who they are and what they mean to each other. The erotica has lovely heat, the moments are a mixture of giving into passions and trying to sort out what each of them needs. It’s well done and I think it’s probably the best part of this work overall.

Where I have a lot to wonder about comes to how the demoness Lilith appears, or rather fails to be a real presence in the work. She’s mentioned through Lux’s past and it’s a bit disappointing how stereotypically evil she is. Yes, it makes sense in the story and Lux’s past, but there could have been a lot more done with her, not the least of which takes me to an interesting thought.

The story’s climax forces a choice upon Lux and Piper, and while it makes sense with the plot threads, there’s a statement from Llith, what she’s done to all of the incubi, and I’ll assume the succubi as well, in the past that could have taken Piper in a completely different direction. Lux had the means to do so and i found myself thinking that would have been a better turn than the one that came to be.

Still, the story ends well, if leaving questions behind. Perhaps the ending is a bit abrupt and left a lot of dangling threads which seems a bit odd if this is supposed to be a stand alone story in a series. Overall it is a well told story with the main character’s incubus nature being important to the overall plot. I just feel like there are too many opportunities left aside that weren’t taken advantage of to make the story have more depth than it does.

As a romance adventure it’s a well told work, but the incubus nature of the main character isn’t really a focal point other than to drive some conflict through the story. I feel like Lilith is a missed story to be told, whether for good or bad is hard to say, she’s not in the story enough. Lux has his moments, I just would have liked to know more about who he really is long before the truth had to come out otherwise.