Get Your Act Together by TeraS

A Review of Incubus: A Novel of Boringville by Robert Clark 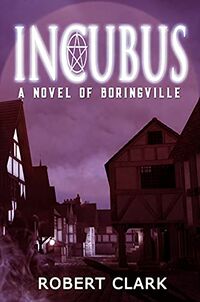 Incubus: A Novel of Boringville by Robert Clark

A short time ago I reviewed the book Boringville by Robert Clark and you can find that review here. I noted at the time some hopes I had for the second work,which I’ll review today. Overall it’s an interesting story, but there’s things missing which take away from the work as a whole compared to the first work which is a bit of a shame.

If one is to understand oneself, then one should be able to see the truth regardless of how painful it is. But it’s easier to not believe in the truth when all one has is their lies to comfort them.

Boringville is a quiet, peaceful town in the woods of central Pennsylvania. It has a small but thriving artistic community scattered in small shops around the town. It’s interesting to look at the quaint architecture and the partly rebuilt fort from the French and Indian War. Despite the rumors, the fort probably isn’t haunted. There is a large, courteous police force to make sure everyone is safe. The hospital, while small, is state of the art. There are nice places to eat. The hunting and fishing near the town are excellent. The cemetery is a bit unusual and picturesque. A bright, cheery town inhabited by friendly people, Boringville is a relaxing place to spend the day. You might not want to spend the night.

Drew has found a home in Boringville, but it’s not the boring place it seems to be. Trouble seems to find its way there very often and when that trouble comes close to home. Drew finds himself facing a battle he wasn’t expecting. Boringville is, after all, just the name of the town, not what happens everyday.

The work follows on a short time after the prior story, Drew has settled in with the succubus Meridiana and is in the process of becoming part of the community. As the story unfolds, new problems arrive and new mysteries start to come to create issues. The overall story focuses on both concerns and in doing so there’s really not that much time spent with Drew and Meridiana. It’s a shame that so little time is spent in seeing how things have gone for them, other than a few hints and teases which are fun, but far less than I’d hoped for.

However, there’s actually a great deal told about Meridiana in one scene that just cemented her as being one of the most delightful succubus characters I’ve found of late. Beyond that scene, Meridiana is far more a presence in the work and I enjoyed that. Her personality, views and wonderfully casual hints to Drew just made me smile.

There is an incubus character, Rune, but he’s more of a shadow, an afterthought and while he makes appearances all over the plot, there’s next to nothing to be told about him, his past, and how things came to be where they are. It’s only at the climax of the story, when he’s fully revealed, that we get a hint of what he can do and who he is. It’s very much the same way that Meridiana was treated in the first story and that was disappointing. He is, like Meridiana, a force for good and not a stereotypical incubus. But there’s not really a pay off in him being in the story which was a shame.

The writing overall is as good as the first work, but again the work needs another editing pass. Save for Meridiana and Drew, the overall story dragged at times and it really shouldn’t have. There are too many misused words and far too often the dialogue lacks emotion. All that said, there’s a lot to like in the story, it does follow on well from the first book. But there’s something missing at the core of too many characters and that’s a shame.

The work closes delightfully for Meridiana and Drew, but a needed resolution for several other characters felt forced and didn’t follow well with the choices made in the first work and the thinking of the main forces in the town as a whole. It makes sense, but it’s so very meta that I just shook my head.