A label on this costume doesn’t make it any better

A Review of Dominated By Demons by Alexis Foxx 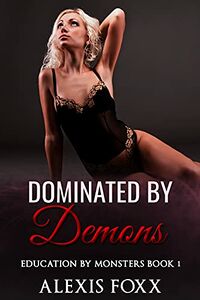 Dominated By Demons by Alexis Foxx

A review today of the first work in a series where the main character desires everything she can be, but is completely lost when she’s offered it.

What makes that interesting is that in becoming so, there’s something unique about her and that can lead the series towards something I hope it can be. The question is, can the story get past the erotica and become the story it should be.

Learning to be a succubus isn’t easy, and it involves swallowing a lot more than your pride.
Desperate and near-homeless, Mia Davis is given an ancient tome from her coven that promises great fortune – by trading your soul to demons. Wishing to save her soul and still pay rent, Mia instead attempts to seduce the The Alpha demons lurking within.
Unfortunately, Mia has a lot to learn about seduction. Fortunately, the demons inside are more than willing to help educate this new witch the only way they know how: rough, hot, and hard. To the budding submissive succubus, being handled by three massive demons feels a lot more like heaven than hell.
With her soul in the balance, how much can Mia take from these three hulking demons?

Mia is at the end of her rope and seeking a way to get ahead. A book opened takes her to encountering demons to offer her power through becoming a succubus. But sometimes the getting isn’t as good as the having. When that means giving up one’s soul, Mia should have looked and listened before she leaped.

The work for the most part focuses on Mia being entrapped with the three demon/incubi of the story, Samael, Azrael and Gabrael. Being so, it means the work is mainly focused on the erotica and leaves much of the storytelling to the beginning and end of the work. While that does fit the tone, it’s a bit rushed and a bit lost among all of the sex that happens.

The erotica itself is very male dominant and Mia is used in just about every way she can be. While some of the actual scenes are a bit over the top for my liking, for Mia they are what she seems to desire so it doesn’t feel out of place in that respect. However the three incubi, even if they don’t all claim to be, are not holding back in their actions, dialogue or desires. They come so very close to being stereotypical, and that took away a lot of my interest in them. Perhaps that was more of a means to frighten Mia than anything else, but at some point the constant “use” gets a bit worn and bland. It really shouldn’t have.

The thing is, there’s several clues and events in the work that make me wonder about how Mia got into the situation she finds herself in. It might be only a passing mention or two, but if the story is meant to be something more than the erotica, that should be a plot point to expand on.

The incubi are, overall, too close to being stereotypical and I hope there’s something more as the series continues. Similarly, I hope that Mia’s transformation doesn’t fall into her being a stereotypical succubus either. There’s a lot of good in this work so far and moving all of the characters towards something better and more in-depth beyond what’s been revealed I think will make this a better story.

I will be looking for the next work in the series to be released in the hope that, perhaps, some of the dangling plot threads are tugged on. Perhaps Mia becomes something more than just a plaything for the incubi, and with any luck at all, she’ll become something far more than anything she’s expected to be. There’s a good chance of that and I hope the series overall becomes what I think it could well be.