A Review of I Would Make You Mine: A Story Of The Succubus by Effie Rivers 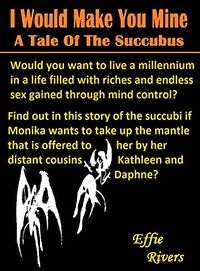 I Would Make You Mine: A Story Of The Succubus by Effie Rivers

The mythos of succubi lends itself to be being shaped and altered in order to create new myths and stories about them.

At the same time, those new stories can bring about questions about not just the characters themselves, but questions about what is right and wrong. A review then of a different sort of succubi myth and how a single choice can have lasting effects in more than one way.

Daphne and Kathleen have lived as succubi for nine-hundred years. Their mortality nears, and they must find a new heir for their East European throne. They have selected a distant cousin from North America to inherit their wealth, but will the cousin want to live as a succubus after she is witness to the loneliness, violence, and empty sex that accompanies the life of a succubi?

There comes a time when one generation of succubi brings into being the next. Choices are made and truths are revealed not just to those that are, but to those that come next. But with the truths plain to see, what is the path forward and what is the best path to choose.

The work is an interesting progression of events between two succubi twins, Kathleen and Daphne, and their soon to be sister Monika. The work tells, through the characters, of each view of themselves, their kind, the relationship they have with humanity. This runs between something close to one character being almost stereotypical in nature to another being slightly more than humane in their personality. How these personalities clash, the choices that come from the interactions and the end result, bring out the core beliefs they share and occasionally reject.

There is a bit of erotica along the way, but it’s not overpowering and doesn’t get in the way of the story itself. Perhaps it’s more accurate to say that the erotica is a means to an end and how that turns the thoughts of some of the succubi towards what might have been and what they are proves to be interesting.

The work does need some editing however, there’s a bit of story confusion here and there, some occasional word misuse or spelling errors as well. Overall the thing that’s missing is a lack of direction for the characters and story which slows the progress of things from time to time. Cleaning up the story a bit both in flow and action I think would make this a lot more than it is and should be.

A unique take on the succubi mythos, interesting characters with flaws that bring about their own transformations. I’d have liked something more from the ending, it’s a bit abrupt for my tastes, but in that a lot of questions are left behind and it does provide another unique viewpoint on succubi that was lovely to see.