A Review of I Summoned an Incubus by Zoe Lawrence 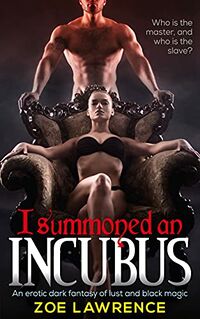 I Summoned an Incubus by Zoe Lawrence

One of the things that I find interesting is how an author puts the pieces of a story together in order for their main character to encounter a succubus or incubus.

After missing her train, a beautiful young lawyer seeks shelter in a dusty bookshop to escape a sudden rainstorm. Inside she finds a book that will reveal a world of black magic and demonic passion she never knew existed. She also discovers a deep, burning lust within herself that craves to be satisfied and conjures an incubus to fulfil her every greedy desire. But soon, the lawyer learns that, when dealing with a sensual creature of the night, the master can quickly become the slave.

A book discovered leads towards the revelation that magic is real and any desire can be made real. But with desire comes need and if one is not careful, one’s need can be all that matters.

The work is a series of hot flashes intermingled with some quite well told narration and development. The main character’s issues are used as points to move the story forwards and it does so well. When they come to find what they have and disbelieving use the spells offered, the path towards the incubus appearing is really more than I expected.

There’s a good deal of exploration of the main character’s sexual needs which ensnare her and push towards satisfaction. That does come, several times, but it’s the need that never leaves that bring about the climax of the work which is both unique and so very well told.

The incubus of the work, who is never named, appears in the last third of the story and neatly meshes with all that has come before. The heat in the encounter is lovely, he’s not stereotypical, which I enjoyed even more. If there’s one thing I would have liked is perhaps a little twist in the ending other than the one that comes.

While it works well and tells a lot about the main character herself, not to mention the trap within summoning an incubus, I can think of another ending which would draw this story into a second work which could open up a lot of the supporting character stories and how the incubus draws them to him.

Regardless of that thought, the work never loses the heat, the story itself has depth and the passions of the main character, when told, give something special to the story overall.

Amazing prose, the story is wonderfully told and surprising from start to finish. It could use one more editing pass however, there are a few minor spelling mistakes, but nothing that would take one from the world the author creates. Well worth a read for those looking for an incubus story that’s more than the erotica itself.