A corset does not equal seduction alone

A Review of The Incubus Trait by Draconis Lit 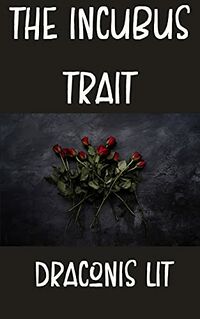 The Incubus Trait by Draconis Lit

An aspect that appears from time to time in some works that interests me is when a character can’t accept themselves for what they are, and tries to make excuses for their needs.

It can be an odd way to tell a story, but it also can bring about needed development in the story. That said, being out of touch with their reality can be a larger problem.

Victor never liked the definition for the incubus but he couldn’t deny he acted like one. Victor has a series of encounters which includes Amber who is an enigma to him. He didn’t understand her. He didn’t know what to think about her.

Victor doesn’t like to be called an Incubus, but regardless of what he believes, his encounters leave little doubt that he does have a power over others.

The work is a series of short hot flashes between Victor and the other characters he encounters. It’s very much a male dominant storyline in which just about everyone that he touches falls into what he wishes, or perhaps more accurately, he gives them what they desire. Some of the chapters have a lot of promise, both in the story idea and the characters themselves.

The problem is that the erotica tends to be a bit overdone, slightly over the top and, occasionally, didn’t hold my interest. That’s a shame as when the heat is well done, it really is, but there are a few points where the erotica didn’t appeal to me. That’s a matter of personal taste of course.

Victor himself is very much in love with himself , a dominant male who enjoys what he can do. Where the story gets interesting for me is the final chapter when something happens that brings him pause. That helped to make him a better character overall as for once he had to think about himself less and others more than he did otherwise.

Still, the erotica ebbs and flows, the characters could have been fleshed out more and the encounters might have been more than the short things they are.

The story ends on an interesting note, perhaps there will be a follow on story about that. It would be interesting if for no other reason than for Victor to have to deal with something new and see where that takes the character and the overall story arc.