Succubi Image of the Week 696

A Review of Demon Hunter: Birthright by Michael Dalton 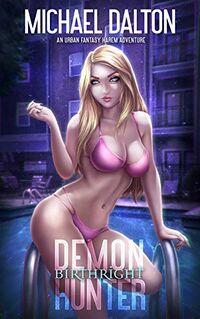 Possibly one of the most popular erotica adventure themes are harem collection based stories. The thing about those based in a fantasy universe is that almost always there’s at least one succubus that appears.

The question that I wonder about is whether the succubus herself will be more than a sex toy and something more of a three dimensional character. A review then of a work where the latter appears to be happening.

Jimmy Kaplan has a hard enough time staying on top of his graduate studies in Chemical Engineering and dealing with the death of his quirky, cantankerous grandmother, who raised him from childhood.
When a beautiful, mysterious woman appears in his apartment building and friends start turning up dead, Jimmy finds himself drawn into his grandmother’s books on magic and demonology, even as he scorns them as superstition.
But all is not as it seems. For his grandmother was tied up with an ancient legacy that Jimmy must face whether he believes in it or not. And he finds that magic and chemical engineering are not so incompatible . . . especially when it comes to beautiful, voluptuous demons.

If there’s one thing that bothers Jimmy more than anything else, it’s a mystery. The problem is that he’s surrounded by them and more keep arriving all the time. Mysterious deaths in his dorm lead towards an encounter he never thought was real and in doing so his world is becoming more complicated.

Overall there’s a lot to like in this work, being the opening to a series by this author. The characters are well fleshed out, the story is interesting and there’s a lot of promise offered. It does tend to become a bit convoluted at times, occasionally having Jimmy circle back on himself in trying to sort out what’s going on. That does lead to some amusing moments that I rather enjoyed.

Along the way, Jimmy has to deal with the mystery of the deaths happening and that brings the succubus of the work, Katarina, into the focus. At first she seems to be stereotypical, but as her story was told, there’s a lot to like about her. Beyond that, there’s a question about how she became a succubus that doesn’t track well for me and that might be something for the series to hang onto in the future. that said, Katarina is a sassy, sexy and a most interestingly intelligent character when she’s given the chance to be so.

That however doesn’t happen as much as I’d like it to, but that’s mainly because this is a story about Jimmy, it isn’t a succubus focused story overall. Katarina tends to appear to drive the erotica forwards, occasionally she does the same for the main story as well and it’s in those moments that I really wish she’d be more developed as a character and I hope she will be.

Katarina is interesting and I’m going to hope that the author does something more with her past and what that might mean going forward. She might have started as a stereotypical succubus, but there’s something more to be explored and I hope that happens.

There’s a lot of promise here and I’ll be interested to see where things go.