Remember Me by TeraS

A Review of Anne On Bended Knees by Salem Sloan 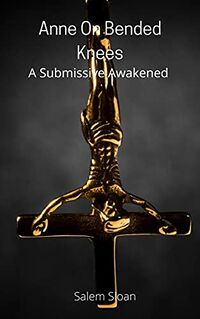 The telling of a story with D/s themes to it can be something of a tightrope to walk.

Perhaps the hardest thing to avoid is moving events in the story to places that don’t fit with the needs of the characters. Reflecting on their needs, seeking out their truths and then playing upon them, when done well, makes for captivating reading.

A review then today of a work in which needs and desires unfulfilled lead into an encounter where one can get what they wish for, if they are willing to be truthful to themselves.

Anne’s life has been in a downward swing. Her job is exhausting, her partner just dumped her, and frankly? She can hardly remember the meaning of the word pleasure. But when a mysterious business card shows up in her mailbox, she finds herself presented with an infernal opportunity. Will she give in to temptation?

Anne finds herself at a crossroads in her life. A lost love, if it ever was that, a life with little meaning, and questions about herself that she can’t quite being to voice. A strange card opens the door to accepting who she is, what she desires and, perhaps, encountering the one who can make her fantasies real.

The work is a slow simmering piece of erotica that doesn’t rush the events needed to bring the main characters together. Anne’s situation and emotional aspects are delved into and the time is taken to tell about what she’d like to have, what she lost, and where things are at the moment. That’s needed to get things set up for the erotica and D/s moments that follow. The story told before Lysander appears is emotional and gives life to Anne who otherwise might have been two dimensional. The care given to her story makes her a fully developed soul and that was wonderful.

When Lysander appears, it’s clear that he is a type of incubus, but while he is unquestionably sexual and has no issues with Anne’s needs, he isn’t forceful as a whole. He offers a possibility to Anne, she could have been forced to take it, but is shown her own truth, her own needs and she makes the choice to give into what she has desired.

The D/s scenes aren’t over the top, nor do they feel wrong. Anne is guided by Lysander, given what she needs and in return Anne’s submissive nature has the outlet needed. There is one point in the work where the story turns a bit dark, but it’s only for a moment and it didn’t take me out of the story which I was dearly glad of.

Lysander isn’t a stereotypical incubus, he has rules to abide by, but more so there’s a sense of honour in him. The encounter isn’t sex alone, it isn’t the taking of a soul or something similar. He gains from the encounter, without question, but Anne does as well. In the end, there’s a connection between the two that brings the story to a close that works well and offers possibilities.

Perhaps the largest possibility is the offer that Lysander makes in becoming what Anne physically desires. I’d have liked to see where that might have taken the two of them, if Lysander in his other forms would still be the same character or if he’d be something else for that moment. It’s an interesting thought to consider with what Anne’s desires are.

It would appear that this is the opening work in a series by this author called Seven Deadly which seems to bode well for future stories. That said, I’d really like for the story of Anne and Lysander to continue further. There’s a lot unsaid about Lysander which honestly is something that needs to be explored.

This wasn’t the typical incubus, or for that matter D/s tale and being so it was a delight. But the story ends in a bit of an unfinished place and moving the characters onwards would be something I’d like to see.

There’s too much promise so far to just let things be where they are.