Our Mother’s Love by TeraS

Is this really that bedazzled? 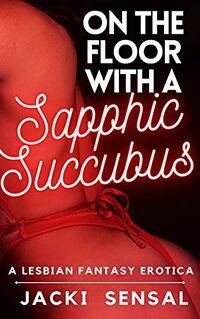 Writing a story from the first person perspective can be a difficult thing to do. The problem comes in the reader trying to fit themselves into the story and allow it to take them where the author wants it to go.

Sometimes the story takes a direction that makes it hard to get into and sometimes that takes one out of the story more often than not.

An invitation to a Halloween party turns in unexpected directions. The worlds of mortals and demons become entangled and where that leads to leaves only questions behind.

Much of the story is creating the universe around the main character and overall that time spent pays off well as things progress. It does tend to lose itself when the heat of the erotica comes into play. Various characters are obviously devils and otherwise, some of them being quite stereotypical in their actions and desires. Being “bad” is one thing, acting “bad” to the extreme is a caricature and doesn’t always work.

The succubus of the work, Carphalea, who’s name I rather adore, is very much the dominant succubus here, taking what she wants and needs as things progress. But there’s a neat little aspect to her that makes her something far better than the rest of those around her. It’s a shame that so much of her and her kind are clouded away, their truths not being revealed.

The work could use one more editing pass, there are some small word choices that don’t fit and sometimes the dialog is stilted and seeking itself. A bit more emotion and connection in the story between the characters would have added a lot I think as well.

Nonetheless it’s a delightful story, with promise. I’d just like more of what was left out to be there and make it more than it is.

It’s a shame the story didn’t turn in the direction I’d hoped it might. Now this is part one of a series it seems, so the story might still turn into something more. I’d hope so, even if the idea is sort of expected as a whole..

There’s the beginning of an interesting story universe, but the question is if the author can manage to keep from going overboard on the sex and focus more on the characters. There’s a lot here to build on, and that should be interesting.