Succubi Image of the Week 693

A Review of Jessica’s Succubus by Jillian Rose 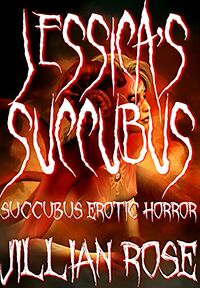 A review today of one of Jillian Rose’s works that recently appeared. While the author tells amazing stories, I’ve found the overall tone varies from one end of the spectrum to the other. Perhaps that’s the horror aspects or the heat in the erotica as a whole, but sometimes the result is quite unexpected.

After experiencing vodoo magic first hand deep in the jungle wilderness of Haiti, renown anthropologist Jessica comes home with her perspective on reality changed. That’s when she finds out Ricky, her husband, has been cheating on her with her assistant, Holly.
Stricken mad with grief and betrayal, the cultural anthropologist seeks to replicate the dangerous magic she saw being practiced by a Haitian witch doctor. After finding an ancient text deep in an academic repository for dying languages and cultures, Jessica attempts a blood magic ritual to summon a demon to do her murderous bidding for her.
What she summons instead is a succubus named Rashiva, who is confused by this female summoner. Seeking a toll for her entrance into this world, Rashiva proceeds to dominate Jessica sexually, doing incredible things with a phallic tail and a tongue that leads to a profoundly orgasmic experience, with a warning that next time, her husband better be around so that she may steal his seed, or else…
Jessica soon learns there is always a price to pay when it comes to blood magic, and after becoming addicted to the demoness’s sexual proficiency, she seeks to get the succubus’s attention once more, for a terrible price…

Jessica has discovered a truth about her marriage that places her mind on sweet revenge. But revenge isn’t what one expects it to be, nor can it be trusted to be as one wants it to be. Summoning evil to do evil is never the best of choices as she discovers.

The story within the work is interesting in many ways, particularly the world building is exceptionally well done. How Jessica gets into the fix she finds herself in makes sense with her character and what has been driving her.

There wasn’t all that much erotica to the story overall, which worked well with the story being told. One of this author’s better works as a whole, there was a lot more emotional impact as well. It’s not exactly over the top horror, nor is it erotica with a lot of heat to it. The focus of the work uses both well and I think that gave the story needed weight.

The succubus of the work, Rashiva, is a very unique kind of succubi and she’s a very strong force in the work. Not just from her dominant personality, but in how the author uses her to control the scenes she is in, drive Jessica towards a choice and see where that takes things. But Rashivais cloaked in mystery, appearing and disappearing as things unfold. There’s hints of the other side of the universe here, but they don’t offer real glimpses into her more than being a force to be reckoned with.

It’s a shame that the story isn’t likely to continue, the way it ends leaves a very interesting thread that could be explored. Perhaps Jessica’s fate and that of her husband are more entwined than what seems to be. It’s just a thought that i think would be good to explore in some way.

Certainly one of the more unique succubus stories I’ve read this year. I’d have liked more about Rashiva, more expansion in the ending would have been nice too. Jennifer’s fate was in her hands from the beginning, it would be nice to see what her fate becomes.