The Promise By TeraS

What is it with fur on costume horns anyway

A Review of The Succubus Bar Complete Series by Jezebel Rose 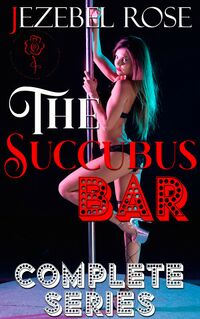 One of the story ideas that I do like is the thought of a bar that’s owned by Succubi. There’s a lot of storytelling that can come from that and today I’ll be reviewing the two works released as of this post as the Succubus Bar series by Jezebel Rose.

Not every bar is all about the drinks they serve. Sometimes it’s about the needs of those that come calling and what they desire. But is that enough to make things worth while?

A young man, Brian, goes into a bar looking for a quick job. The owner, Ava, is a drop-dead gorgeous woman that immediately puts him to the test, but the test isn’t about how good he is at making drinks, but how good his cum tastes. He gets the job, and the owner calls a friend to enjoy the man’s essence as well. Out of nowhere, both the owner and her friend turn out to be far more than Brian thought. Many creatures of the night meet once a month in the Succubus bar to drink release sexual tension. The story follows a recently converted vampire first timer that vigorously takes a woman while her boyfriend watches.

The first part of the series introduces the main characters Brian and his succubus boss Ava. There’s a fair bit of character development along with the erotica, and overall that works well. I liked Ava’s background, her explanation of what she wanted and how things would work between the two of them. It’s a hot flash overall, but even so there’s a good deal of time spent in setting things up that I liked.

It does move fast in the narrative however, which I think takes something away from the characters themselves. They are connecting, in various wats, but that’s not really allowed to be explored before the erotica comes to the fore and pushes the rest of the story building aside.

Still, the beginning was promising and it offered a lot of story options for the following book to delve into.

The second half of the series doesn’t touch on any succubus aspects, it’s focused on vampires in this universe and tells a small story about that. It’s interesting, but it’s not about succubi or incubi, though they are mentioned in passing.

Combined, the two short stories really don’t have a lot to connect them other than the bar itself. I’m not sure that turning the story away from the succubus aspects was really a good idea. There’s story untold about Ava and the other succubus in the work. More so, Brian’s story and reactions needed to be explored more than they were.

For the series as a whole, three out of five pitchforks.

It seems that there will not be a third work in the series, which is a shame. It would be nice to focus on Ava, to tell her story, how the bar came to be. What’s the society like for succubi and incubi, perhaps most importantly, what’s hidden in the shadows to be told? All are interesting ideas and it’s the open door that is left behind when the last word arrives.