It’s red, but that’s not saying very much is it?

A Review of The Witch Of Briar Cove by Jillian Rose 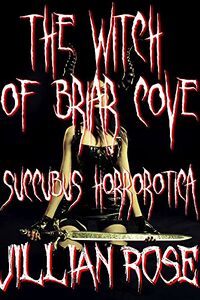 The Witch Of Briar Cove by Jillian Rose

Horror erotica has taken a bit of an uptick in the number of books that have appeared with that theme of late. From time to time, one specific author tells of succubi stories in which the horror aspect takes the forefront of the work. I don’t particularly care for horror themes, that’s a personal preference of course and admittedly that colours my view of many such stories.

The saving grace, at least for me, is when the story has something more to it than the horror, than the evil or events that lead towards things going so very poorly.

Reiner Tomlin has been exiled from Briar Cove after his wife, Elizabeth is accused (and rightfully so) of being a witch, of dabbling in the forbidden teachings of Wicca and esoterica. Six months after she’d been burned at the stake, she begins to visit Reiner in his dreams, giving him ingredients for a summoning ritual in which to bring her back, all the while torturing him with sexual tension.

After successfully completing the summoning ritual, Reiner get’s his wife back, but she is no longer the humble woman he knew and love. Taken under the wing of Lilith, Elizabeth now dawns horns and a wicked physiology that radiates sexual power. In exchange for his seed, Elizabeth lets him drink deep of the nourishing milk that flows freely from her breasts, milk whose properties change Reiner in radical ways, giving him the power to take on the corrupt church in a gory spectacular fashion.

Reiner lost his wife to a mob that called her a witch and left him with nothing. Alone and banished, he seeks a means to return her, to be with her again. But the return brings with it an Elizabeth changed and something dark to walk with him.

If there’s one thing I can say about the book teaser, it tells you exactly what to expect in the story without question. The work reads very much like a slasher horror film in some ways, starting with a need and then telling of where that takes the main character and what he does as a result. It’s a slow build up, clearly showing his view of those around him and the lack of care about anything other than what he wishes to be.

That mainly comes back to the horror aspects, which didn’t have much appeal to me. Once they took the story over, the work seemed to rush towards the ending and left a lot of story to the wayside. I thought that was disappointing, I’d have liked to see more about Elizabeth in the before and when she encountered Lilith.

Horror erotica has never appealed to me very much and I admit that the story, while well told, didn’t keep my attention as a whole. That’s not to say this isn’t a well written story, as it very much is. For those that like the horror theme, the work has it’s appeal.

Perhaps more of the story from the side of Lilith and Elizabeth would have been more appealing to me, to see what they thought as things happened, what their plans were and if they changed as things came to be.

More story I think would have made a lot of difference for me.