A Review of Seduction of the RA by Devlin Price 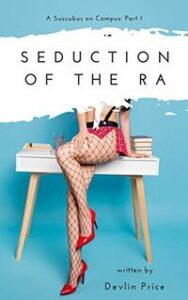 Seduction of the RA by Devlin Price

A review of the first work in a new series today, which has some good aspects to it, but seems to be faltering on being a bit too focused on the sexual aspects of the story and not enough on the storytelling, which is a shame.

Being alone isn’t the end of a story, it’s the beginning of finding out who someone is. But that search to understanding needs more than just ecstasy, they need to find their way.

Anna grew up as a Fairy Princess in Arcadia. But, on her 18th Birthday when she failed to develop any powers she was exiled from the only home she knew. In an effort to find herself, she goes to University with regular mortals. On her very first day, she meets Marcus, her dorm RA. They find each other electrifying and can’t keep their eyes, hands or mouths off each other. One thing leads to another, and their passions take her to new heights and possibly ignites her powers.

This is the first work in the A Succubus on Campus series by this author which begins in a somewhat uncertain way. Anna used to be a fairy Princess, she used to have everything. But on her 18th birthday her world falls apart. Being seen as human, she enters the mortal world and begins a new and terrifying life. But something isn’t quite right with her and it seems that she might be something more than human,,, or fairy.

The work reads as a mixture of a coming of age story and a reasonably hot flash work of erotica, with more of an emphasis on the sex than story as a whole. There is a smattering of background information, but it;s fleeting and leaves a lot to be desired. Hints about Anna’s past are mentioned in passing, but aren’t detailed well. That’s a shame as the reader, much like Anna, is thrown into the story and being so there’s a lot of missing detail that would have been nice to have.

Setting that issue aside, Anna is very much a lost thing in the story so far, and there’s a lot of “train of thought” from her perspective that tends to get wrapped up in directions that I didn’t feel added a lot to the story. Her focus only really seemed to come when she was either involved sexually or was angered as things progressed. I can see this being a mixture of her being lost and alone, then having to deal with a change that she didn’t expect. The confusion works well for her character, but at times feels to be missing something in the storytelling.

I’d like to see more time spent in expanding the characters than has been so far. There are gaps, which should be told in time I expect, and given the number of minor characters that appear from Anna’s past, it would be a shame if they weren’t expanded on, or past events told.

I’m expecting that this work will become something of Anna and her group of lovers against the world story and I’m not against that. I’ll just hope that less time is spent in the sex and more in the telling of the why, who and how of things. Sex alone cannot support a story, and the characters in this work i think deserve better.

There’s too much emphasis on the sex in this story and not nearly enough on Anna’s background, the fairy world or, most importantly, just how it is that she is or might be a Succubus so far. Yes sex is part of things, that makes sense, but it feels like too mich emphasis was placed on that aspect rather then the questions that surround her.

I hope that in the next book there will be some expansion of Anna’s story, a look at the fairy world she comes from. The hints so far interest me and i hope that the author builds on the world they are creating.

Perhaps the one thing that needs to be kept in focus is that sex alone does not make a story interesting, there needs to be something more to things and if that comes in the next part of this series, I have hopes overall.