Succubi Image of the Week 678

Succubi Image of the Week 679

A Review of Lifeline by Kay David 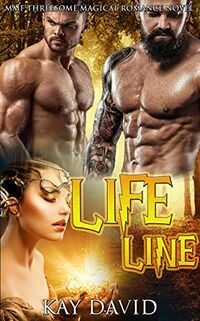 Telling a story isn’t an easy thing. Sometimes the story just flies out, needing to be known and sometimes that leaves a part left behind that doesn’t quite make it to the page.

Perhaps the hardest thing is making the story flow, the interactions real, and, sometimes, that missing piece matters. Not all succubi are evil, some just need a reason to be more than they first seem to be. Finding the reason is a story in itself.

Kelly Mason and Craig Ronald met on a stressful, rainy day outside a local bar. They became acquaintances, then friends. Craig was a thirty-five year old man who had just been fired from his job at a factory. Kelly was a thirty-two year old store owner. His store had just been robbed.
Craig was already attracted to Kelly from the moment he saw the store owner. It did not take long for them to start having an affair. Meanwhile, Craig had found a job (the only one he could find) as a driver, making deliveries for a local drug gang. He was coerced and threatened into it. He did not need the threats though. His life was in shambles, and he needed the money. He had been on his own most of his life, and he believed no other person would look out for him. He did not inform Kelly. Besides, Kelly was safer without knowing these things.
Kelly begins to feel Craig pulling away, and he tries to get Craig’s attention. Eventually, he resigns because he and Craig were not dating in the first place. But he informs Craig that he would be available if Craig needs anything. Kelly, who is bisexual, begins to hang out with Patricia Duncan. Craig had introduced Patricia to Kelly, hoping they would become a couple. Craig did this because he felt he was the wrong type of company for Kelly.
One day, there is a major shakeup in the city. Bullets fly, people die, and the police are after the drug gang. Craig is a familiar face, and the police want him. But so do the gang who want to kill Craig, so he does not implicate them. Patricia and Kelly find themselves trying to help Craig find his way to the police and avoid being murdered by the gang. Will they succeed in saving their friend? Will the Succubus keep to its word and save their relationship?

Kelly and Craig are two lost souls in a world of disappointment and missteps. There’s a need within both, seeking to be made real. But that need needs a key and a succubus feeding her hunger might be the only choice they have.

The work is a mixture of mystery and coming of age story with a scattering of erotica. The main characters have a lot to figure out about themselves, and those around them, and this struggle is a bit painful at times for them both. Still there is hope on the edges of the story and it is satisfying.

The succubus character of the work, Astraroth, initially is somewhat stereotypically evil, really being focused on her needs more than anything else. But that changes and things happen to open her mind to possibilities. By the end of the story she’s on a path that’s somewhat redeeming of her and I liked that.

The heat in the erotica simmers, it’s not over the top or pushing the limits of what makes sense for the characters. It’s mainly to draw the main characters together and give them a reason for moving on and not becoming stagnant.

The work needs at least one more editing pass to clean up the dialogue and narration. Given that being done, I think it would help with what’s mainly missing here. Emotion. A side note, this work has been reissued a number of times by the author and so the link in this review might not work.

It’s an interesting read, but the editing takes a lot from the work. Given more time in editing, in making the dialogue sound better, I think that would bring the story to be what it’s trying to be.