Succubi Image of the Week 672

Succubi Image of the Week 673

A Review of Succumbing to the Succubus by Janet Graceland 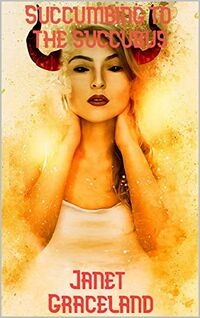 Succumbing to the Succubus by Janet Graceland

There’s a lot of succubus transformation stories of late, many of them having a futa theme to them. The thing is, in many cases the story isn’t really that much concerned about plot or character development.

It seems that the transformation, which usually has a gender one as well, is the main thing and then the story goes off the rails. The thing is, given some time to tell a story, and tell it well, can bring about a lot more than might be expected.

When Skyler’s curiosity gets the better of him to discover what job his girlfriend, Sarah, has at a nightclub, he doesn’t expect to find himself surrounded by supernatural creatures. What happens next is the unthinkable: the woman in charge of the club offers to transform him into a succubus. With the changes that take place to his body, Skyler discovers new passions that he could never before have imagined.
And when the queen of the paranormal world steps in believing Skyler to be her mate? Well, things just became a whole lot more complicated.

Skylar can’t figure out what his roommate Brianna is hiding. Curiosity demands that he sneak into where she works and see what’s going on. But the truth that awaits him leads to another world and another life and perhaps something he needed himself.

The story is mainly a transformation work with gender and succubus themes. It’s a bit uneven at times, the main character Skylar losing themselves along the way and being very unsure of what they become to a point. The hesitation, the exploration of themselves and what they become are interesting. The succubi in the story, both Skyler and Brianna, have some lovely relationship moments and that part of the story felt right.

It’s when the story turns on its head, and goes off in another direction that I found myself wondering if that was really needed. While I can see the reason behind the shift in story in the latter half, I felt like there was too much story left to the side that could have developed the characters further.

The transformation scenes are interesting, the erotica is a bit muted in the heat overall however. It’s a bit over the top much of the time and at some points didn’t really do a lot to carry that story onwards. Again, the problem I think is there’s more character development needed, more story to tell, and it just gets lost in the telling.

The story is far more interesting than the transformation or erotica overall. It needs more depth at times, perhaps a bit more telling of how things come together than what is. That said, the characters are interesting, the story gets somewhere and perhaps that’s the best thing of all.