Succubi Image of the Week 665

Succubi Image of the Week 666

A Review of The Succubus Queen by Kyle Canon 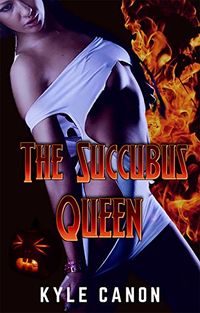 The Succubus Queen by Kyle Canon

It’s one thing to confront one’s own darkness, something completely different to battle an entity with dark purposes. One cannot know who to trust after all. Sometimes not eve oneself.

One year ago on Halloween night, The Queen of the Succubae – Lilith, possessed a helpless virgin in a place that had been her prison for millennia. Amber and her friends were outcasts, members of the geekiest book club on campus and all virgins! Each year they would find a haunted location to spend their Halloween. This year it was Amber’s turn to pick the spot and she found the perfect location; an abandoned Brothel which had been the site of many mysterious murders over the last century. She had no idea a malevolent entity occupied the premises and would take them on a night of ultimate terror and sexual depravity. Using Amber’s body, Lilith seduced the men who were her best friends. Seduced them and drained their life energy in the process. Helpless in her own body, Amber could only watch in terror as she was the instrument of her friends demise. Now, Lilith is free in a college town filled with horny students. This is what happened next.

It’s been a year of hell for Amber, one in which she’s been forced to watch Lilith have her way and take souls as she wished. An encounter offers a moment of freedom, a chance to remove Lilith from her body and life. But not all is as it seems and not all good things are good.

Much like the first work, there’s a mixture of possession, erotica and horror themes which work towards telling the story. Lilith remains the succubus of the work, Amber continues to be possessed by her and the struggle continues. There is quite a lot more horror in this work than the prior one and it slowly takes over as the story moves towards the ending.

The erotica has very little heat, the dialogue reads and sounds odd, missing a lot of emotion and structure that would have given this story dearly needed life. It’s also very dark in tone, which is expected considering Lilith’s evil and needs. There’s really little in the way of seduction as well, both Lilith, and Amber as the story unfolds, just take what they wish in an instant.

There’s little in the way of character development as well. Much of the time the characters are more interested in the sexual encounters, the evil deeds they perform and there’s not a lot of time otherwise spent in making them more three-dimensional.

The work needs another editing pass to give the dialogue more life, to expand on the plot and what happens along the way. The erotica itself isn’t all that interesting, mainly being pressed towards the horror aspects of the work overall.

Perhaps the oddest thing is Lilith’s speech, it’s almost always in caps and that just didn’t work for me. Lilith could have been far more a seductress than a monster which I think would have made for a far more interesting story.

The ending is both expected and somewhat disappointing. It’s more of a twist in the tale for the sake of adding some shock value. It almost works, but it’s too rushed and panicked an ending which it shouldn’t have been.

Overall the series had some promise, but I just found myself not able to enjoy the story for the oddities, the harshness and the horror aspects of the work which felt too slasher movie like. It is a succubus story, it has moments that work well, but that’s not enough to really bring this story to what it could have been.