A Review of Slave of the Succubus by Anna Lively

Succubi Image of the Week 661

A Review of Halloween Magic by Luna Rabbit 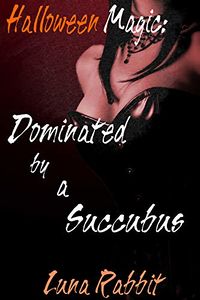 Perhaps one of the most common themes to be found at Halloween are stories about succubi appearing and claiming their dominance over others.

That can be interesting, but when the story turns towards being over the top in that dominance along with moving from means to means, the story can get lost in the telling.

James thought he could score a 10/10 with alpha male allure, but he quickly learns that the table has been turned and Lilith is packing more than just confidence this Halloween night.

It’s Halloween and an alpha male is on the hunt, but he might not be as dominant as he thinks, and when Lilith comes into view, her power will make him submit and suffer.

Lilith, the succubus of the work, is dominant, controlling and every bit the force to be reckoned with one might expect. She’s quite interesting as a succubus, setting aside the path the story takes following her ensnarement of James. It would have been nice to know more about her beyond her being a succubus or the things she does being one. It’s a missing part of the story that I think might have brought more heat and would have made the story more interesting for me.

Overall there wasn’t much heat in this work and honestly there should have been a lot more than there is. Lilith is fascinating but there’s not enough told about her. Perhaps that might be a follow on story in which she claims her pet. It’s a thought and it would tell more about her, which is what’s missing I think.