Succubi Image of the Week 660

A Review of Halloween Magic by Luna Rabbit

A Review of Slave of the Succubus by Anna Lively 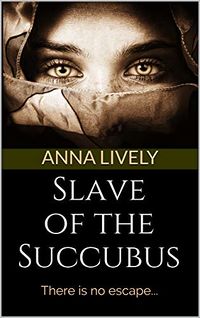 Slave of the Succubus by Anna Lively

Fetishes are, in a lot of ways, a common theme with the appearance of succubi in stories. Be it latex clothing, whips, a very dominant personality or otherwise, there’s usually a fetish need for a succubus to ensnare her prey with.

A review of a story where the temptation is somewhat different and takes the story into paths for a particular fetish need.

Trevor, an average guy who thinks himself nothing special, wakes up to find himself in a strange, underground cave. Unable to move and powerless to resist, he is completely helpless to the female entity that appears before him. She is a succubus claiming to be in this earthly realm for one more night. Her desire is to have a human worship her beautiful feet, and Trevor just so happens to have a foot fetish.

Trevor awakens to find himself at the mercy of a mysterious woman who plays on his desires and needs. But not all is as it seems and when the truth is found out, is it already too late?

The work is a short hot flash with a very specific fetish held at the core of the story. The succubus being of the work, Urahna, reflects in her actions and personality quite a lot of succubus traits overall which develop well over the course of the story. She is very dominant and her power over Trevor bends him to her liking very quickly.

What follows is a series of D/s scenes which focus on foot play over all else. For those that have that fetish, it could be interesting, but I didn’t really enjoy the story when it became single-minded on that need.

The work moves very quickly, there’s not much time for exposition or getting some more background on Urahna than the fleeting glimpse given. As for the succubus aspects, they aren’t really focused on either, the work mainly using a succubus theme to get the characters into the D/s foot fetish scenes that are at the core,.

The theme wasn’t interesting to me, really the opening pages and the ensnarement by Urahna was the one thing that I really liked. I think there’s a lot of room to expand on the story, to add more to it and fell a better story overall. The erotica is there, it needs something more in the characters and story to give this what it needs.