Succubi Image of the Week 638

Succubi Image of the Week 639 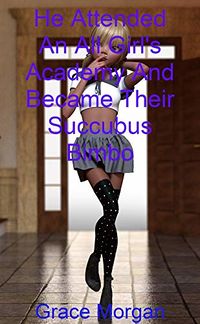 A work that references succubi in the title should have them appear more than fleetingly within the pages. It’s not a question of anything else but expectation after all.

A review then of a story in which one character might be a succubus, another becomes one, and one already is, but overall there’s very little in the way of succubus themes to be found.

When Yuri Takemoto becomes the exchange student at his university, he soon finds himself at a mansion in the English countryside. Within minutes of his arrival, he learns that the mansion houses an all girl’s academy, which presents a problem for him. He quickly discovers that it’s not just a normal academy, but also a coven of witches. He is then transformed into a woman and finds himself flooded with new desires that he never could have before imagined.

Yuri arrives at a new school as an exchange student. The problem is that the school is girls only and he’s a guy. But Mistress Lilith can take care of that minor issue, and when she’s done, Yuri might have a different view of things.

There is some question as to if Lilith is a succubus in some way, but likely not. The revelations about how Yuri came to the school and the reasons as to why he was transformed are cute in their way.

The writing reads very much in an anime tone, the plot is mainly centred around that. The dialogue is missing emotion, and at times there’s no heat in the erotica or seemingly the story wanders aimlessly. Still there is a story to be found, I just don’t think its all that much succubus in nature.