Succubi Image of the Week 629

Succubi Image of the Week 630

A Review of Worship by Trixie Adara 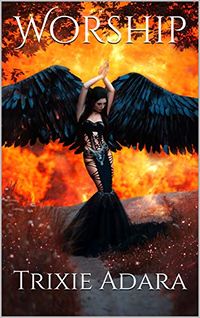 The battle between good and evil is a common theme in stories about succubi. The stories that I particularly appreciate are the ones in which there’s a long drawn out encounter in which the fall isn’t in an instant, that there are consequences and, most of all, some sort of acceptance.

A review then of a work in which an angel and a succubus play a game and it’s for keeps.

Saris has been hunting the appetizing soul of Abigail and finally found her in the most delicious place to devour her: a church. But much to Saris’ annoyance, Abigail has a guardian angel, Rachiel, and Saris hates conflict almost as much as she hates losing her prey. This leads to the classic deal: with no influence from either one, if Abigail turns out to be a slut, she belongs to Saris. If she’s worth defending and pure as driven snow, Rachiel gets to keep her. Pure and simple, right?

Saris has a problem and her name is Rachiel. The angel is protecting a soul the succubus covets for herself. But angels can be so accommodating when there’s a deal to be struck, and Saris is very good at making deals.

The story closes on something of a tease and I’d hope there would be a follow on story at some point as to what happens tp Saris and Rachiel. I think that would be interesting, perhaps the shift in Rachiel brings about some other angels to have their thinking challenged. Certainly the suggestion in the closing dialogue is very tempting to consider.

Well written, the characters are engossing, the heat is delightfully well done. It feels a little short, perhaps a bit more background on Saris would have been nice as she is the main character of the story. Beyond that this is a wonderful piece of succubus erotica.

I’d like to see more of Saris at some point. It also would be interesting to know how she became a succubus, or why she did so. There’s a lot of unanswered questions to build upon and that really delights me.