Succubi Image of the Week 615

Succubi Image of the Week 616 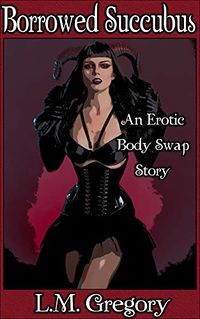 A common theme that is found in succubus stories is of the succubus possessing another for their ends. What’s a bit rare is when the transformation goes in reverse and the succubus is made human and vice versa.

It’s a unique theme and it does bring up a lot of questions to wonder about. A review then of a work in which the succubus and the human both lose themselves and what that becomes for both of

What was just supposed to be an after party hookup, leaves Tim trapped in the body of succubus. And she wants it back! Attending parties isn’t Tim’s favorite pastime, but how can he skip a Halloween costume party where half the people will be dressed in revealing outfits? Much to Tim’s surprise, the party reaches scorching levels when a sexy demoness approaches him for a little fun. The only problem? Sirena really is a succubus! and she wants all of his sexual energy! Lucky for Tim, right in the middle of being consumed, someone else wants the seductive demon’s attention, and summons her. Unlucky for Tim, the summoning goes horribly wrong and Tim is sucked through the portal. In Sirena’s body! Now, with the help of an alluring barista, he’ll need to find three men to help him gain enough power to return to his old body. And he only has three days until Sirena arrives and she’s taking her body back, even if it means the end of Tim!

It should have been a Halloween party that didn’t amount to much for Tim. But encountering Sirena dressed up as a succubus promises something special. But that turns out to be a lot more than just sex when Tim learns Sirena is a real succubus and thanks to a summoning, now he’s the succubus. And Tim’s hungry .

While Sirena is an evil character, both in her original form and following taking over Tim’s body, the story doesn’t dwell on her very much and i think that’s a plus. She seems very two-dimensional, focused on her needs and fulfilling therm to the point where she nags Tim about them. She’s a fish out of water for the entire work, much like Tim is as well. But she doesn’t seem to gain anything by the story’s end, which was a shame.

Tim’s journey is something really special. Dealing with the need to feed, encountering Tessa, figuring out a way to survive in ways that felt right and worked well. He had to work for his path and that made the story so much better.

The work does have a smattering of spelling mistakes and there’s some dialogue that could be rewritten but overall the story is wonderfully told. The ending is a bit too abrupt, a little lost around the edges however. It could lead into another story with these characters however. Perhaps the single thing that mattered the most was the good in Tim and the joy he found with Tessa.

Perhaps it might have been an idea to have Tim and Sirena swap names at the end of the work, or at least have Tim take on a new name. Something to show that he’s fully taken to his new existence and there’s something more.

Well worth a read with excellent main characters. I’d have liked another chapter or two, a better ending but overall there’s a lot to like from beginning to end.