A Review of How to Make a Succubus by KayDee Sommers

Succubi Image of the Week 558

A pair of costume wings to consider… 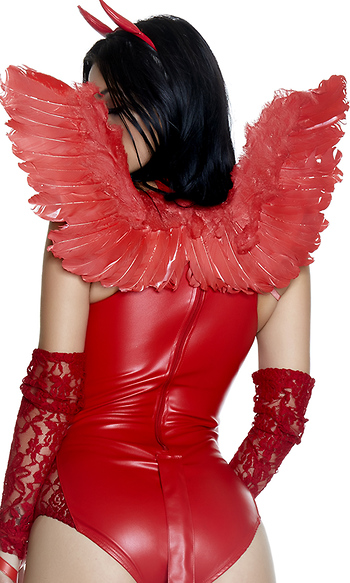 Another of my occasional thoughts about costume accessories to consider. I’ve never added wings to any of my costumes, and certainly the SuccuDress wouldn’t look right with them. But there are something to think about for some designs. There aren’t many I like, but the set here is one that’s popped up on quite a number of costume images I’ve found.

These are simply called the Red Feather Wings and they sell for about $24 US normally, though they can be found on sale, or part of a package deal for less.

Available in black, red and white, for all occasions, they are held in place by elastic shoulder straps which don’t always match the colour of the wings themselves.

They are feathers, not plastic or vinyl and overall they are fairly well put together. The straps are a bit uncomfortable and they tend to shift if you are more active than just standing still.

Tightening the straps up, while keeping the wings in place, also managed to pinch quite a lot. The best option I could come up with was to remove the straps and then reattach them in a cross over pattern. That did help to an extent, but didn’t solve the issue and adjustments needed to be made frequently.

They are a bit small, there is a larger version which I’ll be trying soon as well. It’s interesting that more effort is placed into wings compared to tails. Considering that, for devil costumes, tails are a bit more important, I wonder why?