A lovely WIP YouTube of a different sort of Succubus

A pair of costume wings to consider…

A Review of How to Make a Succubus by KayDee Sommers 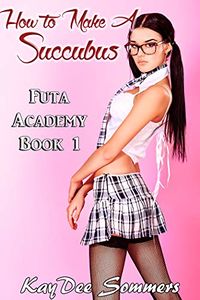 How to Make a Succubus by KayDee Sommers

One of the powers of the Succubi is, quite naturally, the use of mind control or at least persuasion, on those souls they encounter that might need a little push to, well, come along for the ride. If that’s dome well in a story, and it makes some sense, it’s a really good means to building heat.

A review then of the first work in the Futa Academy series which does have Succubi appearing, there is quite a lot of mind control as a whole, but leaves me wondering where things will go from here.

Shy Brittany goes unnoticed through her day, at least until she ducks into her favorite lunchtime spot to admire her crush, Alan, and eat her regular sandwich. Awaiting her, however, is a beautiful succubus who has had her way with Alan and is looking for dessert!

Under the sway of the futa succubus, Brittany will enjoy an afternoon she’ll never forget and find herself transformed by the encounter forever!

Sometimes going to get a sandwich doesn’t quite work out as one might expect. For Brittany, the sandwich is forgotten as she encounters Emily, a succubus that is hungry for something other than a sandwich. But Emily wants something more from Brittany and the trade that’s given takes her to realities and moments she never could have expected.

The work is a mix of a futa transformation, a bit of succubi mind control and a good deal of female dominant erotica. The characters are a little two-dimensional at times, the erotica takes much of the story overall. But it’s when the story tells of Brittany’s thoughts as she becomes a succubus, her changing needs and personality that it became something more interesting.

The two succubi of the work, Brittany and Emily, are mainly creatures of sex and desire which works really well overall. Emily’s mind control over Brittany is well told, the fall is quite well done and the heat was very good. Similarly when Brittany has transformed and she first uses her powers, the heat builds nicely along with her change in personality in her new existence.

Past the transformation aspects, the work is mainly focused on futa erotica. There’s a fair amount of self-exploration which works best when Brittany fully transforms into being a succubus. After this the story is mainly Brittany being dominant over others and trying to sooth her new found needs.

It would be interesting to learn more about the succubi in this universe than just they being all about the sex after all. I’d have liked more background about succubi in this universe, it’s very thin in that aspect. Brittany is interesting, but there really needs to be more to her than the need she has. Given that Emily must be around somewhere. it would be nice to another encounter and perhaps some lessons in being something more than a creature of sex alone.

While Brittany is the focus of the story and what happens with her, and around her, is interesting, there’s just this missing space in the story to tell more about Emily. Perhaps that will come in the rest of the series.