A Review of BattleCat Vs. The Succubus by Jack Bixby 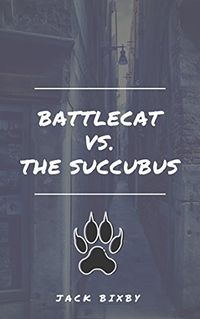 BattleCat Vs. The Succubus by Jack Bixby

More often than not, if the word succubus appears in a book title, one can expect that there will be a succubus character appearing. Now, they can be a large part of the story or a minor thing as a whole of course. What’s quite disappointing is when they appear for barely a page and really don’t matter all that much to what happens.

That said, there’s something about a unique story being told from the viewpoint of a unique character that I find interesting. But as a whole, as much as that character tells a very compelling story, placing a succubus into an origin story one might want to tell that story fully.

Demons prowl the streets of New York City at night, feed on the innocent and preying on the unsuspecting among us. Only one thing stands between us and completely annihilation, and he’s got claws.

Brother Cat lost the only family he ever knew to a white-furred demon, and since a fortunate meeting with a local priest he’s done his best to ensure no one else will suffer the way he did. When his old mentor dies and a young new priest is brought in to lead the parish, Brother Cat will have to break in a new partner the only way he knows how. Trial by fire.

A story of a cat who remembers evil, seeking it out to find a measure of revenge for what has been lost. Sometimes the smaller you are the more heroic one can be.

The work tells of the main character, Brother Cat, and how they went from average cat to becoming something quite spectacular. Seeing the world from their eyes, reading their thoughts and what drives them makes for a very interesting tale. It’s a good origin story, if lacking a bit at points some details or aspects that get glossed over.

Along the way, there is an appearance of a succubus, but it’s really quite short, adds not that much to the story overall as well. There’s a very strong manga feel to things and to a point this works, but some of the story telling needs more fleshing out, or at least, it needs to expand on the glimmers of sides stories that need to be told.

Overall this is a mixture of action-adventure and origin story but the way things read seems a bit clunky here and there. At least one more editing pass would have done a lot to smooth things over in that respect. This isn’t a work of erotica, there are some minor horror aspects to things however, though they are not that strongly in the work.

I’ll give the overall story three and a half pitchforks out of five, but from a succubus theme aspect I can’t give it more than a single pitchfork.

The title offers a succubus, but she’s not really in the story as much as she is an afterthought. It’s a shame really that things turned out that way. I’ve read the balance of the works in the series and I like them as a whole, the characters are interesting and having much of the story come from one perspective is quite unique.

But this isn’t really a succubus themed work by far.