Succubi Image of the Week 542

A Review of Succubus Seduction: Corrupting The Priest by Desiree Desire 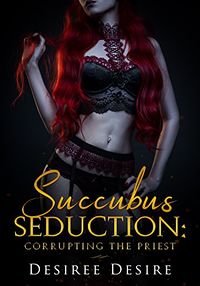 Beyond that issue, the story itself can be interesting, there can be a hint of erotica along the way, but when the story comes to a screeching halt with really no resolution at all, that takes something away. Building up expectations and then leaving them wanting does not make for an enjoyable work as a whole.

“Begone, creature of Hell. I have no time for sinful pastimes. I made a vow when I entered priesthood, a vow that I am not about to break.”

There was a laugh, and suddenly Paul was staring into a pair of red eyes that gleamed with a devilish delight. The succubus was sitting on top of his desk now, one hand stroking his chin, her smooth bare legs wrapping around his sides. Her features were delicate and rather pointed, like those of the painted angels he prayed to, her full lips pursed in a little pout that made her look like a frustrated village girl. But when she smiled, he saw in her eyes a twinkle that he’d never seen in any mortal eye, something mischievous…

This is a story of internal struggle between vows of chastity and the sinful pleasures of the flesh.

Paul is haunted by many things, from his past, concerns about the meaning of his life, and perhaps most of all, he’s haunted by a succubus that desires him. The battle wages within and without, the succubus a temptation that never seems to leave. When the choice must be made, where does his heart and soul reside?

Overall the work is told from Paul, the main character’s perspective and in doing so there’s so very little that is told about the succubus herself. She is never named, has very little in the way of dialogue and overall her actions are mainly in the temptation and questioning of Paul’s will. Over the course of the work there’s a number of revelations about Paul that sort of work and telegraph the ending far to early for my tastes.

The succubus doesn’t seem to be overly stereotypical in her actions, not really being evil as such, but more an ongoing temptation and presence that presses on Paul from the first to the last. It does work, if only to move the story from place to place, but her temptations are somewhat rote and her reasons for doing so are not a surprise.

The main issue with this work is a real lack of emotional connection with Paul or the succubus. They battle, there’s some heat that builds up over the story, but that’s interspersed with breaks in the narrative that, while needed, seem to take away the heat and the author has to start all over again.

There’s really very little erotica overall in the work, mainly being told in the last few pages of the story. It reads very much like a hot flash with a very strong adult movie feel. For all of the building up, the choices made and the want shown, it just went by in a rush and when it was over there just didn’t seem to be a real point to reflect on.

The ending is sudden, it leaves much to be desired and it didn’t pay off for the story told before. There seemed to be a rush to the ending that didn’t allow for needed character development, or most of all, taking one moment to name the succubus herself. Considering the conclusion, and the hint of Paul’s future, I’d have expected that.

While the work mainly focused on Paul, it did so in a way that seemed to be lacking emotion much of the time. Similarly, the succubus, not having a name, wasn’t that deep a character. She was of single purpose and once the climax came, there wasn’t anything left to support the story. The ending just came to a screeching halt, with little real passion or wonder and that seemed to be a shame. If nothing more, the succubus really should have revealed her name if for no other purpose than to make her something more than just a means to an end.

I’d hope the author in their next work might spend some time with the succubus of the story, delving into her character and telling that story as much as they do with the main character. It feels like the missing piece that would make the erotica more meaningful and bring with it the heat that’s missing here.

The characters need more depth, the erotica needs more time and the story, overall, needs more purpose than it’s given.