Succubi Image of the Week 527

A Review of Incubus Drive: A Sluttification Tale by Gale Crowley 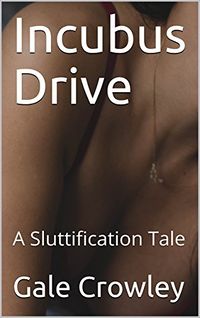 At times there are books that feel like they were rushed to sale. That can be from the characters being one-dimensional, the plot being wafer-thin or the editing being almost non-existent. Perhaps the most telling thing is when a book is released and the summary reads “placeholder”. That’s fine for a few days or a week, but beyond that, one wonders.

Setting all that aside, in the telling of a story in which there is mind control, transformation, evil corporations and betrayal, not getting past the sex into the story why things are takes a lot away. The appearance of an incubus for about one pages worth of story doesn’t explain anything either.

Erotica is more than describing oral sex with a phone, it’s how everything came to be and in not revealing that, there’s a lot of story left wanting.

As much as I’d like to say that’s a joke, the actual book summary is “placeholder” and nothing else. So that leaves it to me to summarize things: Cassie’s been given a chance to be a beta tester of a new mobile app. But there’s something odd about it. It seems to crash all the time, it seems like a joke and a waste of time at first. But everyday the app becomes more and more interesting. There’s something strange about the app, something odd about what’s happening to Cassie the longer she’d exposed to it. Her thoughts turn more and more towards sex everyday, her body is changing, and when the truth is revealed, will it be too late for Cassie?

Overall the work is a mixture of mind control, twisted technology, body transformation, a lot of oral sex in a strange way, and, for but an instant, the appearance of an incubus. In spite of the book title, the work is less about an incubus than it is about Cassie being sucked into the control of the app and being twisted by it.

Much of the story is spent in Cassie’s thoughts being muddled by the app, redirected and otherwise focused on sex alone. There’s not actually that much erotica overall, in that much of the erotica involves Cassie being made to interact with the surprising features of the app. There is some heat in that, but I didn’t feel like that heat really pulled me into the work as much as I would have liked.

The incubus of the work, who never is given a name, is very much a one-dimensional character, having one purpose and one thought as to what to do with Cassie. His appearance is far too short, tells nothing as to how things came to be, and just acts as a means to push the story towards the conclusion.

The conclusion is really disappointing in that there’s hints of something going on, something far more interesting than all the time spent over Cassie’s sudden oral fixations. But it’s never explored, only mentioned in passing and when something of a reveal appears, it’s more about gloating than it is about explaining the incubus, or for that matter, anything else.

As a mind control story, the heat in the writing tries to make up for the lack of plot or character development, but really it doesn’t. The transformation is very quick and, again, is more about the heat than anything else. It’s all of the missing background, how things work, who the incubus is, why he’s there, that leaves so many holes in the story that bother me.

The work does end on a point where a part two would make sense. If that does happen, perhaps more time can be spent in telling the story behind this story, if only to satisfy my questions and musings. Still, there’s a lot to be desired here, and the author should start with putting a better plot summary up than the single word there is. There’s also a real need for some more editing, there are a number of tense and word errors to clean up, not to ignore that more character development around Cassie, her friends and the incubus himself, would make this work so much better.

Really not a story about an incubus, more a story about mind control and that does work to a point. It’s somewhat rough around the edges, more care in editing and development would really make this something better.

It is a good start, I’d like to see what comes next, who the incubus is. I have my thoughts about that, perhaps that will appear sometime.