Succubi Image of the Week 525

A YouTube speedpainting of Lucie Wilde as Morrigan Aensland

A Review of A Lustful Demon by Amber Lee Iver 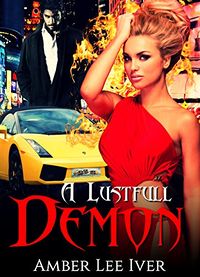 Telling a short story means, of course, that there are things that have to be left aside for the sake of getting further in the storytelling. But the cutting of story paths and storytelling really shouldn’t be at the loss of character development or dialog.

The voice of the characters matters. The narration offers part of the story, but the words said fill in the gaps and allow one’s imagination to light the corners of the work that are hidden in shadow. A succubus is more than her needs or wants and given the chance to see things differently, wouldn’t it be a good idea to tell more of what changes them and what matters when they come to see that they can be more… If they are able to see that in themselves?

Isabelle is a demon cast out of hell to spend her time on earth for an indefinite length of time. She immediately takes on the shape of a beautiful woman and decides to roam the clubs at night using her devilish powers and hot human body to intoxicate men and give them whatever they desire. But when she meets Jack, a religious man who is ready to rid the world of this demon with his spiritual powers she has to pull out all tricks in the book to prevent this from happening…

Isabelle decided that some demons aren’t worth doing “favours” for and in doing so she finds herself tossed out of hell and into the cold reality of Earth. The funny thing is that Isabelle does enjoy sex and in a very short time she finds that her abilities make her the perfect sexual partner to any human she meets. But no good thing lasts forever and in time a demon hunter comes calling and Isabelle’s world turns on the brink of falling apart. But perhaps she can convince the hunter that she’s harmless and might be exactly what he’s looking for.

The work is very short and as such the story feels very rushed at times. Hints of things that have happened to Isabelle and Jack in their past get glossed over and at times the narration gets lost as well. Beyond that, the dialog just reads wrong at many points, being far too formal at times or, more often, needing an edit to correct some word and tense errors.

The backgrounds of both characters need to be fleshed out more in the story, but more so, there needs to be a stronger connection between the two of them. I’m not sure if there is actual attraction or rather infatuation. Both would work in the story, but it’s a little too wishy-washy for my taste.

At least I would want the author to revisit the story and build on what is there. There is more than enough ideas to build on and doing so would add a lot to the work as a whole. It’s just too short, it needs a lot of editing in the dialog and overall there’s points at which the story becomes a difficult read right when the heat comes and the story should have been very enticing.

The ending is very abrupt and very open-ended. It doesn’t need all the loose ends tied up, but given that the conclusion is barely three paragraphs, and the dialog seems like the characters are reading a box of cornflakes, getting one more full page and perhaps getting one answer to satisfy the overall story would have meant a lot.

The work needs a rewrite to improve the dialog, which is just so monotone that the heat between the main characters gets lost within. I’d have liked to know more about Isabelle then the skimming of her past and how things happened for her. There’s a lot of story in there, especially as to how she made the choices she did.

Similarly Jack needs to be fleshed out more in his character and personality than he is. It’s fine to sat that he’s a decent man on a mission, but again there’s something missing here that could have been expanded on.

An ending far too abrupt leaves a lot of story on the table. Perhaps that story might have been Isabelle and Jack’s future, whether together or not. Either way the story just didn’t close well and that’s honestly the biggest shame of all.